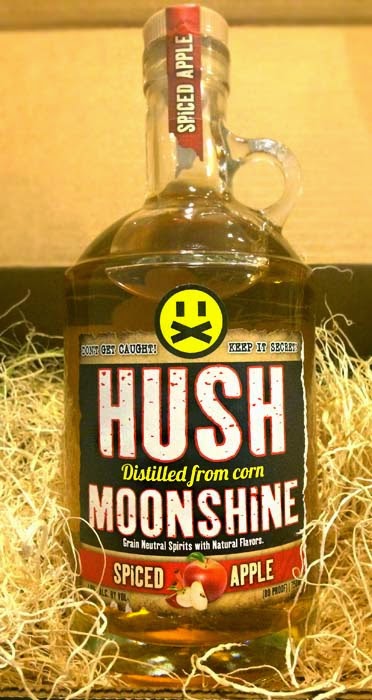 If where you're at is anything like where I'm at, then the weather has just started to cool down for Fall.  And thank goodness!  I love this time of year!  Cooler weather is perfect and, as usual, we get a whole onslaught of new beverages perfect for the season.  Case in point this new moonshine, Hush Spiced Apple Moonshine!

If you've been following Bob's Brew and Liquor Review for anytime now, you will have noticed I've reviewed several "moonshines" and white whiskeys.  Now this isn't actual moonshine, rather "moonshine" in parenthesis.  Real moonshine isn't sold in stores, silly.  But the principal is the same, it's a corn liquor-based spirit like traditional moonshine.

Reading through Hush Moonshine's press material, you'll see this is distilled at 190 Proof, which as I've said before, is as high as traditional distilling methods can distill.  Past that, it takes chemical and other means to get higher.  Regardless, they then water it down to the traditional 80 Proof.  But enough chit chat, let's taste this bad boy...

Hush Spiced Apple Moonshine looks the same color as a light apple juice, which is very fitting actually.  Aromas are of apple juice, cinnamon, and vanilla - and really quite appetizing.  Tasting straight brings a bit hit of cinnamon and clove, followed by notes of  sweet mulled cider, vanilla bean, corn liquor-y undertones (if you know this taste, you'll get it), and a spicy, lingering bit of cinnamon bark in the finish.

This is surprisingly potent and flavorful.  Somehow I underestimated this one, even with the cool bottle and moonshine written right on the label.  To me, this is kind of like Firewater mixed with apple juice and a splash of straight corn whiskey.  And if you know me, you'll know that it evokes plenty memories of good times in both the Fall and Winter.  This is tasty enough to drink straight, but I prefer it on the rocks.  ALTHOUGH, my guess is many people are going to take it as a shot, and hey, do whatever you want.  It's going to be like a slightly gentler, apple-y Firewater, which does makes for a tasty, daring shot.

Overall, well above average for this category of booze.  Go buy it if it sounds awesome.  A nice change of pace this time of year, for sure!

Drink This: if you want a cinnamon-forward apple flavored moonshine that is well above average.  Seriously, this is perfect for fall.  Pour it over cracked ice and sip... or take a shot.  Whatever!
Don't Drink This: if you're a traditionalist and want your booze unflavored.