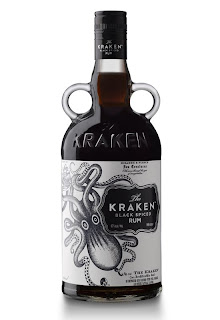 Kraken
Black Spiced Rum
Proximo Spirits
47% Alcohol (94 Proof)
In the past when I've wanted rum, I've always sailed with one guy: The Captain (aka Captain Morgan).  I've had my fair share of Captain Morgan over the years.  Okay, probably more than my fair share.  Much more... But, he has always treated me kind and makes a bad ass drink mixed with cola.
Anyway, after all these years there has been really only one other spiced rum that has even come close to The Captain, and that's Sailor Jerry.  And while Jerry is an okay guy, he has nothing on The Captain.  He's like the Captain's redheaded step-son who most people are ashamed of.  So... when I heard there was a new spiced rum out, my hopes didn't get too high, the Captain seemed to be fulfilling all my spiced rum and cola needs.  Many other rums had failed me in the past, tasting like rubbing alcohol and some sort of vanilla and spice extract.  Not exactly great.
Kraken is owned by Proximo Spirits, based out of New Jersey, yet made in Trinidad and Tobago.  Go figure.  The Kraken is a giant sea monster octopus thing, that legend says lived near Norway.  Apparently it attacked ships and dragged them under the water.  A worthy adversary for The Captain, I say...
When I actually saw the bottle for Kraken, I thought, "Hey, at least the bottle will look cool in my liquor cabinet."  The bottle actually is really quite awesome, one of the best new bottles I've seen in awhile, a definite plus.  The color of the liquid suits the name spiced black rum, as it really is quite dark, looking nearly the same color as cola, much darker than standard Captain.  The taste on its own is like a slightly amped up version of Captain, but at 94 proof.  Granted, Captain does sell a 100 proof version, but it seems as though the alcohol flavors somewhat override the spicy rum flavors in the Captain 100.  That is NOT the case with this nectar.  Kraken has a deeper, spicier flavor than Captain.  Kraken maintains its strong flavor at full proof without tasty overly alcoholy (is that a word?) and is tasty enough to be drank neat, perhaps, depending on your palette, but it definitely works on the rocks.  But mixed with cola, like most rums, is where it really shines.  It goes with cola better than any spiced rum I've ever had.  It is like these two are soul mates, which is great since spiced rum and cola is one of the few mixed drinks I enjoy.
Drink This: if you are a fan of Captain Morgan and want to try something new, and perhaps even better.
Don't Drink This: if you don't like sailing the seas with pirates and giant sea monsters, while boozing it up. 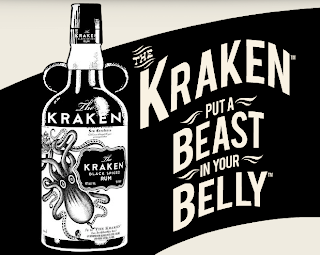