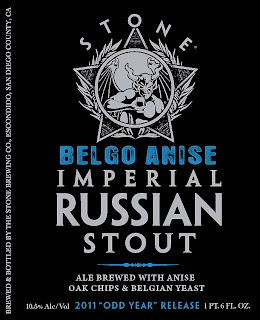 Stone Belgo Anise Imperial Russian Stout
Stone Brewing Co.
IBU's: 52
Alcohol: 10.5%
I'm not going to lie.  I freaking love Imperial Russian Stouts.  And Stone Brewing Company out of Escondido, California makes a great one.  This, however, is a variation on their standard Imperial Russian Stout.  The Stone Belgo Anise Imperial Russian Stout is their 2011 "Odd Year" Release and is brewed with anise, oak chips, and Belgian yeast, making it a welcome departure from the typical one.
It pours about as black as any beer can be and lets no light through.  It smells like dark, toasted malt, and anise.  The flavors are predominantly a black coffee base with dry, dusky anise and almost a vanilla extract aftertaste, with subtle hints of an oaky earthiness.  This is a lot like Uinta Brewing Company's Labyrinth Black Ale, except the anise in this beer blends better into the mix of flavors.  The other thing this has going for it, is the mouthfeel.  The Stone Belgo Anise Imperial Stout is much thicker and richer than Uinta's, although that one is thicker and heavier than most typical beers to begin with.
Anyway, this is a damn impressive beer.  The anise blends well into the dark black coffee notes surprisingly well, and without being sweet.  Some people could find the anise to still be too strong, especially if you're not a huge black licorice fan to begin with.  For me, however, this is a great beer and a refreshing change from the standard Imperial Stout.  Would I drink this everyday? No.  But, it is a good change of pace and really quite delicious.
Drink This: if you love dark, heavy, thick, brews and a ton of real black licorice flavor.
Don't Drink This: if you hate black licorice or if you are a weakling who drinks watery, piss beer.
Posted by Unknown at 8/14/2011