Maker's Mark 46
Kentucky Bourbon Whisky
Barrel-Finished with Oak Staves
47% Alcohol (94 Proof)
I'm not going to go into the whole whiskey versus whisky spelling debate, especially where Maker's Mark is concerned since they seem to do whatever they want.  This bourbon is spelled whisky, with no "e" unlike other bourbons.  Give it a rest.
Anyway, Maker's Mark 46 is the new bourbon from Maker's Mark who are notorious for really only having one standard production bourbon, at least until this year.  They have had a handful of special and limited releases over the years which have either just been a different label or color of wax, or a slightly higher proof than the standard Maker's Mark at 90 proof.   So for them, this is a huge move and it's about time.
Maker's Mark is distilled in Loretto, Kentucky and is part of the historic Bourbon Trail which goes through six different distilleries in Kentucky.  The standard Maker's Mark is what many people consider to be one of the most well-known, staple bourbon expressions.  And is it good, sure, but nothing remarkable.
Unlike the standard bottling, Maker's Mark 46 is at a slightly higher ABV (94 proof) and is reportedly aged longer than the standard's 6-7 years.  The most notable difference is the "barrel finishing" with toasted oak staves and this is what seems to make the biggest difference taste wise.  The color is a slightly deeper caramel and amber hue than the standard which is from longer aging and the oak staves.  The taste is a lot like the standard Maker's, with the typical wheated caramel, candy corn, and oak in the background.  The finish, however, is more surprising with a great deal of spice and cinnamon notes.  This extra kick almost makes me think they just added some Wild Turkey or a few drops of a rye whiskey to my bottle of Maker's Mark.  Granted, it's NOT a lot different than the standard Maker's Mark, which is fine.  Certainly it's not an impressive or amazing whiskey, but it is definitely good.  I prefer Maker's Mark 46 over the standard, but they are both pretty tame.  That seems to be the case with most wheated bourbons, except perhaps W. L. Weller Antique.  I can see some people really enjoying this and others wanting their classic Maker's instead.  Personally, I bet this is 10x better at barrel-proof, but hey, that's just me.
Drink This: if you want a spicier, kicked-up version of Maker's Mark bourbon.  It is still pretty smooth, though, which many people seem to enjoy.

Don't Drink This: if you are looking for an aggressive, kick-you-in-the-sack whiskey.  This isn't it.  If you want that, have some Wild Turkey Rare Breed or Fighting Cock bourbon.  Both are delicious and let you know you're drinking bourbon.  Have 'em neat and you'll feel like a bad ass cowboy.  Maker's 46 won't do that.  At least the bottle is cool. 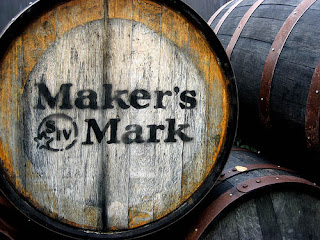