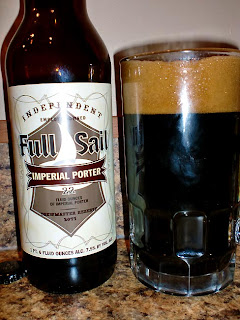 Full Sail Imperial Porter -
Brewmasters Reserve 2011
Full Sail Brewery
IBU's: 60
Alcohol: 7.5%
Full Sail Brewery makes a variety of delicious beer.  They do, however, own the Session beers, which I can't exactly say fit the delicious label.  Regardless, the bulk of their beers are worth trying.
Around every ten weeks, Full Sail Brewery releases a new Brewmasters Reserve beer.  Half of this year's Imperial Porter will be aged in bourbon barrels as they usually do and re-released next year as their Bourbon-Barrel Aged Imperial Porter.  Judging by this year's Imperial Porter, that's one to look out for.
For now we are looking at their non-barrel aged Imperial Porter.  It racks in at a measly 7.5% ABV, which is considerably weak by imperial standards.  But, in this case, I will forgive them.  The Full Sail Imperial Porter Brewmasters Reserve 2011 pours a deep, dark brown, almost black.  It smells of toasted malt and dark chocolate, but you can obviously tell it is not a stout.  It tastes like toasted malts, roasted nuts, and an earthiness that I enjoy.  It is deliciously thick and creamy.  This is nothing over-the-top or ground-breaking, but it is well-balanced and very drinkable.  It is obviously lighter than an imperial stout, without being too light.  The thickness of this brew really holds it together.  It is a good beer and worthy of trying, but I'm waiting for the bourbon-barrel aged version next year.
Drink This: if you want a delicious, well-rounded, dark but not too dark beer.
Don't Drink This: if you want something extreme and ridiculously flavorful, or some watery mass-produced beer.  This is neither extreme.  This is a good beer, yes, but nothing extraordinary.  I wouldn't pass it up if someone offered me one, though.  This could potentially be a good beer to convert Guinness drinkers to more of the craft brew scene.
Posted by Unknown at 8/17/2011