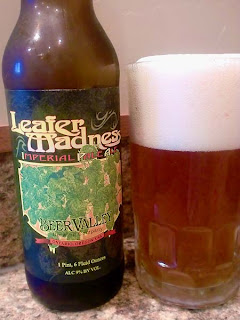 Leafer Madness Imperial Pale Ale
Beer Valley Brewing Co.
IBUs: 100+
Alcohol: 9%
Beer Valley Brewing Company out of Ontario, Oregon makes some mighty fine brew including one of my all-time favorites, Black Flag Imperial Stout.  That is one hardcore, delicious beer.  But, I digress.
One of their newer beers, created in 2008, is Leafer Madness.  Yes, it's a cheesy name and a total play on the old phrase, but with the amount of hops in this, I will forgive them.  And yes, those are pictures of hops on the label.  Leafer Madness is an Imperial Pale Ale with 9% Alcohol and 100+ IBU's.
Now, before I go further, let's go over the IBU's thing so I can make y'all a bit more educated.  IBU stands for International Bitterness Units, a scale used by beer geeks and chemists to determine bitterness using a spectrophotometer and solvents.  Generally, the more IBU's, the more bitter.  Makes sense.  BUT, the more malt that is used in the brewing production, the more the hops will be tamed down and rounded out, which is why some Imperial Stouts can be 100+ IBU's and still not seem nearly as hoppy and bitter as some IPA's that are in the 80's.  So, why the normal cap at 100 IBU's?  That's because most people's tongue cannot detect anything above 100 IBU's in bitterness.  When a brewer goes above this, it is usually to create a much stronger  hop aroma.  And as we all know, smell plays a huge role in taste.  Some home brewers can often get IBU's over 200 in their India Pale Ales, but this requires a shitload of hops, making it expensive and almost redundant overkill.  Almost.  I bet the aromas are godly, though.
Anyway, back to Leafer Madness.  It pours a hazy, dark yellow-orange color with a ridiculous amount of frothy, thick head despite my attempts to pour properly.  This thing smells like a hopbomb.  Hops, hops, and more hops, with a touch of pine in the background giving it an earthiness.  It tastes like crisp, bright hops and dry grapefruit.  There is only a slight touch of background sweetness as it really is quite dry.  The 9% alcohol hides well, making this a beer that could sneak up on you.  This one is hoppy, hoppy, hoppy, without being overkill somehow.  It's not the most well-rounded beer, but if you like your beers hoppy, crisp, and dry, give this one a try.  I enjoyed it.  It's not nearly as earth-shatteringly amazing as Black Flag, but it is mighty good.
Drink This: if you like hops, hops, and more hops.
Don't Drink This: if you want to be able to taste your dinner while you drink it.  The hops will flood your palette and make food taste funny for a little while, but that's not necessarily a bad thing.  I'd rather have beer with flavor than a watery, forgettable, waste-of-my-time beverage. 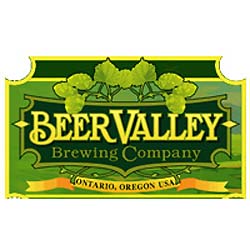