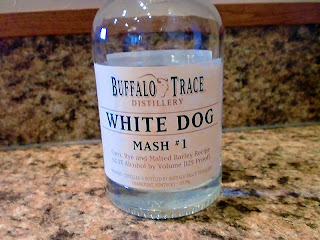 Buffalo Trace White Dog
Buffalo Trace Distillery
Corn, Rye, and Malted Barley- Mash Recipe #1
Unaged Whiskey
62.5% Alcohol (125 Proof)
The recent rise in craft distilleries has also given rise to more and more "white" whiskeys, "white dogs," "white lightning," or "moonshine."  This has caused quite a stir in the whiskey community, especially by those aficionados who prefer a longer-aged whiskey.  The reason behind releasing so many of these white whiskeys is to fund the new distilleries productions.  Typically whiskeys, aged in full-size barrels, are usually aged 3+ years, with 5-10 being more standard for things like bourbon.  Scotch tends to age even longer preferably.  New distilleries simply cannot afford to wait that long.  They need something to fund their business, which is where white whiskey enters in.  Not only is there no law as to how long whiskey must be aged (can even be less than a day),  but distilleries are using smaller barrels to speed up the process of aging.  This actually creates some different flavors (notably just extra oakiness) rather than the the smoothing effect caused by long-term aging.  Sure, the color gets darker quicker, but the flavors don't develop the same as with larger barrels.  This whole drama is discussed all over whiskey blogs, as in John Hansell's blog What Does John Know as part of Malt Advocate.  But, I will let it rest for now.
Anyway, back to Buffalo Trace's White Dog.  It is their Mash #1, which is comprised of corn, rye, and malted barley and bottled at a respectable 125 proof.  To the unknowing eye, it would appear to be water, vodka, or gin.  It smells like sweet corn liquor with some interesting green notes.  The taste is really quite sweet, almost like corn syrup (which makes sense), but with an impressive alcohol kick and some odd rye spice.  You can definitely tell it's whiskey, though.

The coolest part about tasting this is seeing how much the aging in new charred oak barrels changes it from the white dog to real bourbon.  You can really start to pick out the notes gained from the wood (molasses, brown sugar, caramel, oak, etc.) when tasting it side-by-side with some of Buffalo Trace Distilleries' standard bourbons.  Will I buy it again? Not likely.  Was it worth the purchase and experience of comparing it with regular aged bourbon?  That's a big YES.

Drink This: if you want to compare white dog to the finished bourbon product side-by-side so you can differentiate the flavors more.
Don't Drink This: if you're not a whiskey and beer geek, or don't like drinking whiskey neat.  If you've never had whiskey neat, this 125 proof white dog is probably not the best place to start.
Posted by Unknown at 8/20/2011