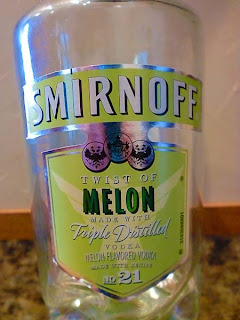 Smirnoff Vodka - Twist of Melon
Diageo
Flavored Vodka
35% Alcohol (70 Proof)
Once upon a time, my wife decided she wanted to start having a drink more than twice a year, perhaps even once a month.  So, what better way for a lightweight than to have a mixed drink?  She sent me on a mission to find something sweet enough that she could make an easy mixed drink.  My first attempt at purchasing something for her was some coconut rum, which she had liked when we were dating with cola, but after I made her the first drink, she thought it was "too strong."
So, second try, I'm wandering around the liquor store, trying not to just stock up on a bourbon and scotch, thinking "Hey, we have Sprite, what might go well with that?"  Enter Smirnoff Vodka's Twist of Melon.  I figured wow this might actually work.
Fast forward and I'm at home.  I open the bottle of Smirnoff Melon Vodka and smell it.  Hey, not too bad.  It actually smells like real honeydew melon, which I'm 100% sure it's not.  Smirnoff claims it has notes of cantaloupe, too, but I really only get honeydew scent.  So, after the decidedly wonderful subtle scent, I decide to taste it straight.  And guess what? It tastes like ass.  Pure, sugary, artificially flavored ass.  Don't get me wrong, standard Smirnoff vodka is decent stuff.  This is their No. 21 Recipe, which is their typical red-label 70 proof weak stuff, so it should be fine.  BUT, it's not.  It tastes messed up hardcore-style when tasted neat.  Regardless, I mix it with some ice and Sprite for my wife and taste it again.  Not awful, but seriously too sugary for my palette, luckily the Sprite tones down a lot of the artificial taste of it.  It actually smells really cool and refreshing, which is deceptive.  Deceptive like a Thai Lady Boy.  But, that's another story.  If only the sweetness was dialed down, this flavored Smirnoff might be drinkable in a mixed drink on a scorching hot day on the beach.
Consequently, my wife really enjoyed it and actually had a couple more mixed drinks of Smirnoff Twist of Melon and Sprite over the next few weeks.  But then? Nothing.  She magically stopped drinking again and now there is a half-full (yes, I'm an optimist) bottle of sugary, artificially-flavored, mess of ruined vodka in my liquor cabinet.  It is weird to see it sitting there among my bourbon and scotch, just taking up room and being effeminate as can be.  I'm half-tempted to just chug the shit and be done with it, but I would probably barf out my nose and go into a diabetic coma.  So, it still sits in my liquor cabinet... waiting... and mocking me with its sugary ways.


Drink This: if you are girl who loves sweet mixed drinks.  It actually smells like real honeydew, which is its only redeeming quality.
Don't Drink This: if you have any sense.  But hey, at least it will get you a buzz.
Posted by Unknown at 8/15/2011