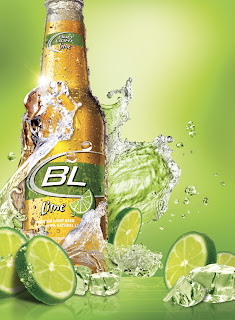 Bud Light Lime
Flavored American Lager
IBU's: -20? Probably
4.2% Alcohol
Okay, here's the deal, some people love Bud Light and some people love shoving a wedge of lime into their beer bottle.  These people would love this beer.  And would probably drink a ton of it.  Personally, I find that Bud Light does NOT taste like beer.  It tastes too watery and the mouthfeel is just too thin.  Bud Light has never had any discernible hops and in this, I swear the hops are in the negative.  They must take the bitterness out of the water to make it even less bitter than plain tap water.  Seriously.  But, it still manages to taste like Bud Light, but with some sort of artificial, metallic lime flavor.
Generally, I would hate something like this.  And given the usual circumstances this is true.  HOWEVER, if you have been working outside sweating your balls off doing hard labor, construction, moving rocks, or camping AND if this beer is served COLD AS SHIT, then, and only then, is it amazingly refreshing.  That's really about the only time it can be justified, unless you're a frat boy or a chick.
Drink This: if your ass is sweaty from the blazing heat and you need immediate refreshment, or if you're just drinking to get drunk.
Don't Drink This: if you have class.  Or if it's served warm.  Or if you like beer that actually tastes like beer.
Posted by Unknown at 6/30/2011 1 comment: 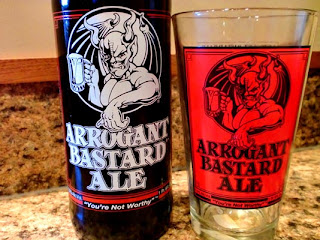 ARROGANT BASTARD ALE
Stone Brewing Company
American Strong Ale
IBU's: Classified
7.2% Alcohol
Well, what can you say? Arrogant Bastard Ale is badass.  Sure, there's an awesome gargoyle on the bottle and it's 7.2% alcohol, but really, seriously this is god damn delicious beer.  This is how beer can and should taste.  It is essentially a moderately higher-alcohol, hoppy amber ale.  It doesn't try to be overly dark for the sake of being dark, or even overly hoppy just to be hoppy.  It is perfectly balanced in all respects.  Surely some people are going to piss and moan and say it is too hoppy, well those people probably drink the big name watery beer with no hops whatsoever.  Well, screw them.  Most people I have given this beer to have loved it; a few, not so much.
Here's the writing on the back of the bottle:
This is an aggressive beer. You probably won't like it. It is quite doubtful that you have the taste or sophistication to be able to appreciate an ale of this quality and depth. We would suggest that you stick to safer and more familiar territory---maybe something with a multi-million dollar ad campaign aimed at convincing you it's made in a little brewery, or one that implies that their tasteless fizzy yellow beer will give you more sex appeal.  Perhaps you think multi-million dollar ad campaigns make a beer taste better.  Perhaps you are mouthing your words as you read this.
Like it says, this is an aggressive beer, especially by most people's standards.  Certainly I have had many darker beers, many hoppier beers, and many higher strength beers, yet somehow this one strikes the perfect balance.  The fact that I have gone through several cases of this stuff over the past couple years is proof enough of how amazing it is.  This is exactly why is the first beer being reviewed on Bob's Brew and Liquor Reviews.  I can think of no better way.  I love this stuff...
Drink This: if you like full-flavored, hoppy glasses of deliciousness.
Don't Drink This: if you dislike hops and enjoy watery piss beer, if you like sugary girly drinks, or if you are a pansy.
Posted by Unknown at 6/30/2011 3 comments: