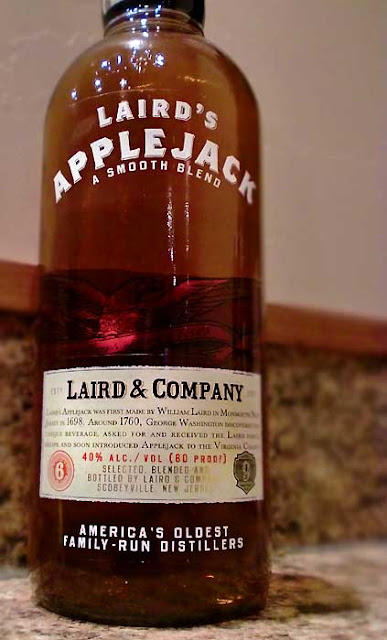 
A couple months back in my review of Germain Robin's Apple Brandy, I had briefly mentioned applejack, both the real stuff and Laird's version.  But until now, I haven't formally reviewed Laird's Applejack... but now it's time.
As a refresher for those of you who didn't read the review of Germain Robin's Apple Brandy, true applejack was a Colonial American staple beverage.  It was originally a seasonal product made in the winter by smashing a bunch of apples, letting them ferment into essentially apple wine, then leaving them outside in the freezing cold.  Of course, this would cause the water to freeze, leaving behind the alcohol from the apples which would still be liquid floating on top which could then be removed.  It's essentially a crude distillation method, but hey that's true applejack!
I have yet to try true applejack, although I'm tempted to make some myself over the coming winter months (although, I'm not condoning moonshining!).  My only worry is that since I don't know what the hell I'm doing, I would probably end up with something tasting more like prison wine (aka. wine made in a toilet bowl).  And honestly, I'm not a big fan of that.
So, here we have Laird and Company who make their version of applejack.  They have the distinction of being reportedly one of the oldest distilleries in America, starting in 1698 with William Laird, well before any bourbon was being made.  Supposedly George Washington loved Laird's booze so much that asked for the recipe so he could give some to the people in the Virginia colony.  I don't know if that's just a family tall tale or what, but the family has kept up the tradition of distilling with apples ever since.
Now, Laird's Applejack isn't a true applejack, it's technically apple brandy.  And even then, it isn't solely apple brandy.  As you can see from the heading up top, it's a blend of apple brandy with grain neutral spirits:  35% apple brandy to 65% grain neutral spirits to be exact.  Which honestly in my mind, is kind of lame.  It's weird, because Laird's do make a couple 100% apple brandies.  This just isn't one of those.  I'm not sure if they were trying to replicate the flavor of those early authentic applejacks or if they are just trying to cut costs.  Either way, this isn't a 100% apple product.  The other 65% could be any sort of grain: barley, wheat, rye, who knows...  Regardless, I like to think they were trying to replicate the real Colonial applejack with this blend, but until I try some of that, we'll never know.
Laird's Applejack pours a bronze, caramel color which could easily be mistaken for bourbon.  It smells a lot like cheap brandy with a vague hint of apples.  You take a sip and get notes of mixed green and red apples, vanilla, and a bit of spicy oak and raw alcohol in the finish.  I can't say that it's terrible, as it is certainly fairly unique and has a good bit of apple flavor.  But it's a weird combination of things going on.  It's kind of like someone mixed bottom shelf brandy with apple cider and a bit of vodka.  And yes, in a way, that's kind of what it is...
Drink This: if you want to try something akin to true applejack.  I think (and hope) this is Laird's replica blend recipe that tastes somewhat like the real applejack made through freeze distillation.
Don't Drink This: if you want authentic applejack.  To get that, you'll probably have to find some eccentric hobbyist who moonshines his own under the cover of darkness.  Also, don't drink this if you want a smooth and refined apple brandy (also called calvado).  I've heard Laird's makes some, but I haven't sampled them, and for my money the Germain Robin brandies are hard to beat.
Cheers!
Posted by Unknown at 11/27/2011