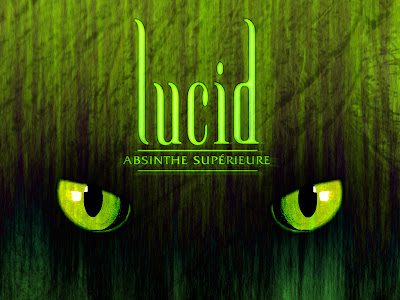 Lucid Absinthe
Verte
Origin: France
62% Alcohol (124 Proof)
Absinthe continues to be a mysterious spirit, mostly because of its legendary history and people's misunderstanding of its notorious ingredient, wormwood.  If you want a more detailed description of some of this, check out the review of Germain-Robin's Absinthe Superieure.
Essentially, wormwood was believed to drive people to insanity.  Modern research shows that it basically blocks the receptors that alcohol binds to that cause central nervous system depression (aka. drowsiness and sedation), which certainly makes you feel the alcohol buzz differently since the sedative effects are mysteriously subdued.  It's weird if you're not used to it, but the effects are noticeable, especially after a couple drinks.  Absinthe was banned in the US in 1915 and wasn't unbanned until 2007.  That's right, 2007!  This is the mysterious drink that Van Gogh, Hemingway, and many other artists and writers used at the turn of the century.  Some call it the "Green Fairy," and although it is reported to cause hallucinations, I've never had any from absinthe... and I've gone through many different bottles.
Anyway, Lucid is a French-produced verte (green) absinthe and was the first one distributed in the US following the 2007 lifting of the ban.  Initially it pours rather clear, with only the slightest tinge of green. 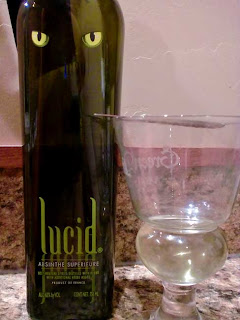 Then, as you slowly drip in ice-cold water (either with or without a slotted absinthe spoon with a sugar cube) the absinthe begins to swirl and shift into a hazy, bright, opaque white (this is called the louche) and releases its vibrant aroma. 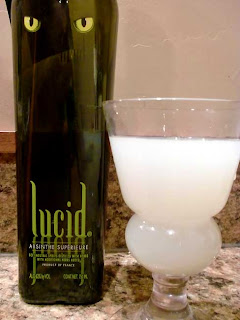 Lucid smells really quite strong with in-your-face aromas of anise and fennel.  You can easily smell this several feet away from the glass, which I find amazing.  You take a sip and are greeted with a spicy bit of fennel, muted anise, and strong wormwood that causes your tongue and cheeks to feel numb.  This the main way you can tell real absinthe from the fake stuff--- the wormwood.  Aside from its unique flavor, wormwood also numbs your mouth as you drink, seemingly dulling your senses to the powerful 120+ proof alcohol.  It finishes with strong lingering flavors of wormwood, the pleasant mouth-numbing, and a bit of something bittersweet.

Lucid Absinthe is actually sweet enough and subdued in its anise taste to the point where pouring the water over a sugar cube is really not needed, unless you really like things sweet.
This isn't the best absinthe I've tried (and I've had many), but it's the real thing, above average, and certainly worth trying at least once.

Drink This: if you want to try a true absinthe full of the wonderful, mouth-numbing wormwood.  And if you can brave it, after a couple drinks the wormwood's distinct "buzz" (aka. receptor blocking) does make itself known.
Don't Drink This: if you don't like fennel or anise, you know, the flavors associated with black licorice?  Because that is what this tastes like.