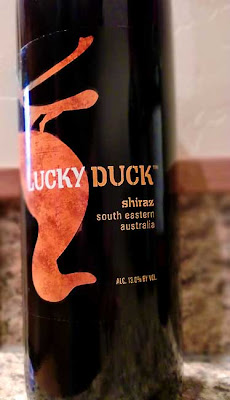 Lucky Duck Shiraz
Vintage: ?
Origin: South Eastern Australia
Walmart
Alcohol: 13%
Ahh yes, the drunken duck is back.  I'm of course talking about the Lucky Duck brand of wine.  You know, the one with the eye-catching labels of a drunk as a skunk duck that's only sold at Walmart?  Yeah, that one.  And it's only sold at Walmart because they produce and own the line of wines.  Well, they import it anyway.  I still have yet to find out who actually makes this stuff.
This is the Lucky Duck Shiraz, which apparently is actually grown in Australia where Shiraz is king.  I've gone over the difference (or lack thereof) between Shiraz and Syrah before (in my Black Swan Shiraz review for example), so I won't bother with that again.  Go read it if you're curious about the two differing styles.
The Lucky Duck Shiraz pours a rather dark purple with fairly strong aromas of blackberries and a hint of earth and coffee.  You take a sip and get more of that sweet blackberry and some lingering jammy plum, with a decent acidity and a hint of spice in the finish.  The tannins are actually fairly moderate which was surprising.  Actually, the whole wine was pretty surprising to me.
This isn't complex or dynamic by any means, but it actually tastes like Shiraz!  And for only being $4, it's quite the deal.  It had much better flavor than I was expecting and caught me off guard.  Even though I haven't formally reviewed all of the Lucky Duck reds, I have tasted all of them and this, to me, is the best of the bunch.  And yeah, that's not saying much because it's still a $4 wine that's only sold at Walmart, but if I only had $4 to spend on a bottle of wine this may be the one I choose!  Granted, for a dollar or two more there are many better wines, but hey, it's only $4, what do you expect?!
Drink This: if you want a relatively good bottle of $4 wine.  It's nothing amazing,but it's crazy cheap and decent quality considering the price.
Don't Drink This: if you have $5 or more to spend on a bottle of wine.
-On a side note for the curious, if you only have $3 to spend drink this stuff (yes, that's a link to a ruby port).  It's not good, but it's made with real wine and hey, it's $3.
-On another side note, I just realized how many dollar signs I typed in this review...
Posted by Unknown at 11/18/2011