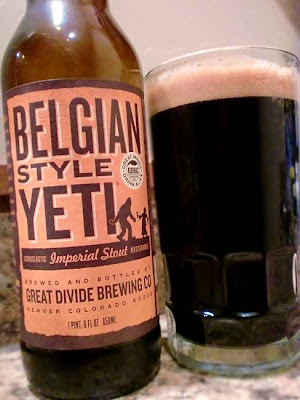 Belgian Style Yeti
Imperial Stout
Great Divide Brewing Co.
Denver, Colorado
IBU's: 75
Alcohol: 9.5%
I know, I know, not another Imperial Stout!   But hey, I love 'em.  And most importantly, it's my blog so I do what I want!  Anyway, if you've read around this blog at all, it would be easy to realize that I like Imperial beers.  I've said it time and time again in many a beer review.
For now, I'm looking at Great Divide Brewing Company's Belgian Style Yeti, an Imperial Stout with a respectable 9.5% alcohol.  Unfortunately I've never been able to try the standard Yeti Imperial Stout, yet here I am reviewing the Belgian version of it.  Oh well.  Maybe someone out there can send me one to review? They don't distribute in my state.  Sad, I know.  Anyway, Great Divide makes several variations on their Yeti brew including chocolate and espresso oak-aged versions.  This one is their Belgian version, which simply means it is brewed with Belgian yeast which gives it distinct fruit and spice notes. 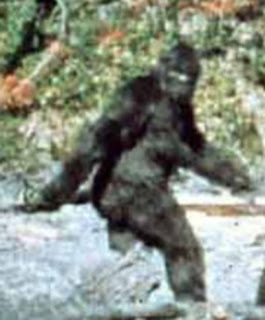 The Belgian Style Yeti Imperial Stout pours thick, creamy, and black as tar.  It is actually so viscous that I had to pour improperly in order to get any sort of head to form.  If I poured like that with a normal beer, it would have swelled out of the glass and gone everywhere in a foamy mess.  As you can see from the pic, the head is a beige color, typical of many Imperial Stouts.  It has aromas of roasty malts, cocoa, and a distinct Belgian sweetness (raisins? plums?).  You take a sip and are greeted with velvety milk chocolate, dark malts, bittersweet cocoa, and more of the Belgian fruitiness, raisins, plums, cherries, a whole plethora of fruit, and a lingering spicy and boozy finish.
This may be a tad sweeter than I normally like my Imperial Stouts, but it's an impressive and epic beer nonetheless.  I really enjoyed it, overall.
I've had a Yeti sighting and I was impressed...
Drink This: if you want a thick, black, fruity Imperial Stout.  This really is a good combination of both the Imperial Stout and Belgian style brews.
Don't Drink This: if you're afraid of the Yeti...
Posted by Unknown at 11/05/2011