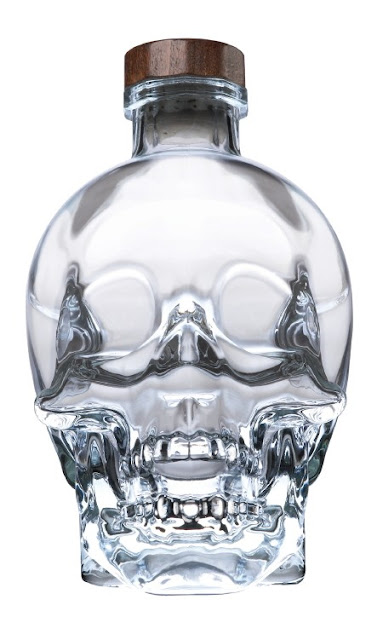 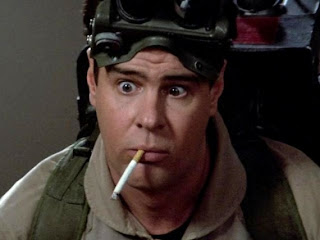 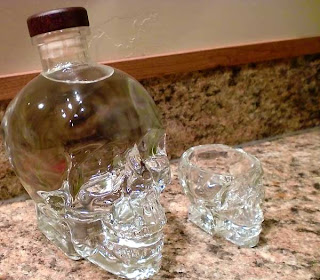 Crystal Head Vodka comes in a badass bottle and pours crystal clear (pun intended) with no sign of color or haze at all.  It smells really quite mild, like mineral water.  This carries over into the taste where you get a seriously smooth neutral drink with some minerals, a touch of vague sweetness, and a relatively short soft finish.  It's not as flavorful as something like I Spirit (which is a characteristic of many high-end vodkas), but Crystal Head is certainly one of the smoother, more mild vodkas I've had.
For most people this is going to be one of their absolute favorite vodkas due to its super mild, smooth character.  For those of you who are vodka snobs and prefer to be able to taste some of the starting grain/grape/potato, this won't be your style.
Drink This: if you want an incredible smooth, mild vodka that comes in a badass bottle.
Don't Drink This: if you're looking for a flavorful high-end vodka.  This may be a touch too mild.  Also don't buy this if you're oldschool and think the bottle is cheesy.
Who you going to call?  ...Dan Aykroyd so he can bring you some vodka.
Oh yeah, here's his infamous promo video:
Posted by Unknown at 1/19/2012 2 comments: Sawtooth
Skyline Red Wine
Snake River Valley
Nampa, Idaho
Vintage: 2006
When most people think of Idaho, they think of potatoes and wildlife... or if you're a liquor geek, then maybe you think of potato vodka.  Or maybe you're awesome and think of Napoleon Dynamite (yes, it was filmed in the glorious middle of nowhere, Idaho).  But amazingly, even though Idaho looks like this 8 out of 12 months: 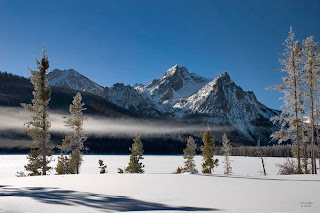 ...the Sawtooth Winery is still able to somehow grow several grape varietals.  Granted they are in Nampa, a warmer part of the state, but still, who would have thought that growing wine in Idaho would be a good idea.  Certainly not me.
This is the Sawtooth Winery's Skyline Red blend, the 2006 vintage to be exact.  From what I have read, it changes quite a bit in composition each year.  The 2006 is 62% Cabernet Sauvignon, 29% Syrah, 8% Merlot, and 1% Cabernet Franc.  In theory it sounds like it's going to be a great blend, but... maybe not so much.
It pours a dark, brownish ruby red.  It has aromas of dark fruits, prunes, black cherry that carry into the palette much like you'd expect: more dark fruits, cherry, raspberry, raisin, a touch of spice, and something oddly sour and herbal that lingers in the finish (almost like a combination of bay leaf and cilantro).  The tannins are light to moderate.
Overall, this is an interesting wine, if not a touch lighter than I would prefer, but the weird, lingering finish doesn't quite set well with me.  Perhaps my bottle was corked, I don't know.  I will try this again if I get the chance and update this post with the findings.  If this is the way the winemaker intended it, then sorry, I'm not a fan.
If you want something from Idaho, I suggest sticking to the potatoes, vodka, elk, and venison.  And oh yeah, there's some decent beer, too.  There are probably a few good reasons why Idaho isn't wine country...
Drink This: if, well no, I wouldn't recommend it, at least if my bottle wasn't corked and this is how it was supposed to taste.  I actually used the second half of my bottle to cook a tasty marinara with.
Don't Drink This: exactly.
Posted by Unknown at 1/14/2012 No comments: 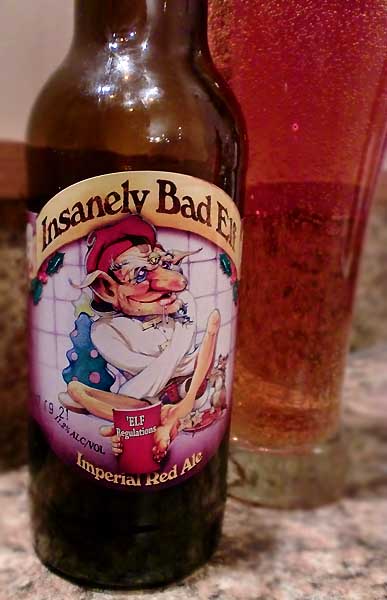 Insanely Bad Elf
Imperial Red Ale/
Winter Warmer
Ridgeway Brewing, United Kingdom
Alcohol: 11.2%
IBU's: ? (I would guess 20)
Okay, so this beer review is a few weeks late since it's now January and this is a Christmas beer.  But Hell, who cares.  Beer is beer, drink it whenever you want.  Plus, it's still cold as shit, so I can drink a winter themed brew if I want.
This is the Insanely Bad Elf beer from Ridgeway Brewing out of the UK.  I've heard they make several variations on their Bad Elf theme, but this is the big daddy of the bunch.  They call this an Imperial Red Ale, but considering it's high-proof and winter theme, it's also a bit like a Winter Warmer, but its taste and massively awesome 11.2% ABV makes it more like a Barley Wine.  So which is it?  Imperial Red? Winter Warmer? Or Barley Wine?  Personally, I would say it fits all three categories, but those are just labels regardless.  What really matters here is the brewwwww.
Insanely Bad Elf comes with a drunk ass elf in a straight jacket on the label.  So far so good.  Not that I usually drink to get drunk, but a little holiday cheer (if you know what I mean) when Santa stole all the money from your bank account to buy your family and kids presents never hurt anybody.  It pours an extremely clear, light copper color, with a head that is damn near impossible to get even when pouring in a completely wrong way that would make a normal beer foam up all over your counter top.  There are aromas of light malts, sweet fruits (berries), toffee, maple, and quite a bit of alcohol.  You take a swig and get hit with in-your-face sweet malts, malts, and more malt, a taste of almost golden raisins and figs, with a boozy, lingering malty finish.  There are no discernible hops here, just a malty, boozy glass of holiday cheer that Santa needs every once in awhile when he's stuck staying up late putting together children's toys only to be awakened a few hours later by, "Santa came!!!  Look at all the presents!!!"
This beer isn't great tasting (it's good, not great) or balanced, or anything normally associated with a decent beer.  But, considering it's a holiday brew, I'll let all that slide since it's still a beast of a beer..
Drink This: if you need a malty glass of boozy, sweet, high-proof sunshine on a cold, winter day.
Don't Drink This: if it's hot outside.  Even though you can do whatever you want and drink this in 100+ degree weather, I think it's the polar opposite of what I would prefer to have.  If on the other hand, you're in need of holiday cheer or something to help get you through Thanksgiving dinner with your in-laws and extended family, here you go... drink up.
Posted by Unknown at 1/12/2012 No comments: 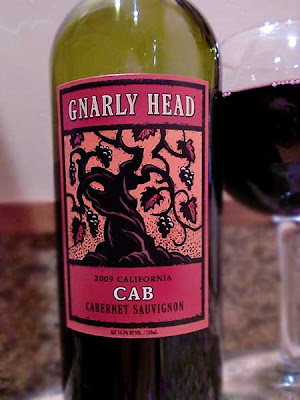 Gnarly Head
"Cab"
Cabernet Sauvignon
Vintage: 2009
Origin: California
Alcohol: 14.5%
If you'd read through some of my wine reviews, it becomes pretty apparent that I am a red wine lover.  The bigger and darker the red, the better!  So, if you're looking for a lot of white wine reviews, you may have to look elsewhere.  Okay, I do occasionally enjoy a white wine, but to me, they're more of a spring/summer type of drink.  Anyway, enough chatter, let's get to the topic at hand: WINE.
For now, we are looking at the Gnarly Head Cabernet Sauvignon, the 2009 vintage to be exact.  This is another big and boozy California red from the Central Valley.  They are called "Gnarly Head" because they focus on old vines, which of course, tend to produce less grapes per cluster, yet with more flavor.
The 2009 Gnarly Head Cabernet Sauvignon pours a dark, dark ruby red.  It has distinct cranberry and raspberry aromas.  These cranberry and raspberry notes carry into the palette where they are forefront, full, dark and juicy.  There's a touch of black cherry, pepper, and oak in the finish.  The tannins linger, moderately strong, but that's expected for a Cab.
I can't say this is my favorite Cabernet Sauvignon, but it's actually pretty good and well above many similarly priced Cabs.  I would buy this again, but next time I'll have it with a big ol' ribeye steak served rare.  That would be a great pairing... hmmm...
Drink This: if you want an above average Cabernet Sauvignon in the sub-$15 price range.
Don't Drink This: if you're looking for a super complex, highly tannic Cab.  This one is fairly straightforward, yet exactly as a Cabernet should be. 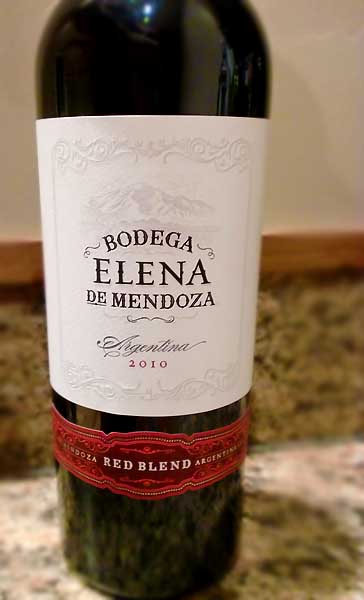 Bodega Elena de Mendoza
Red Blend
Vintage: 2010
Origin: Mendoza, Argentina
Alcohol: 13.8%
Every time I see a wine blend not only do I wonder what varieties are in the wine, but why are they blending the wine to begin with?  Are they trying to simply create a new expression or merely blending some sub-par grapes with something else to make a better wine?  Unfortunately, most blended wines tend to be either full of funky, off-flavors or rather bland.
Here we have the 2010 vintage Red Blend from Bodega Elena de Mendoza, obviously out of Argentina.  And what do you expect from Argentina?  That's right, a Malbec.  Previously I've professed my love for Malbecs, but this one is not just Malbec, but a blend with Malbec being the primary varietal at 62%,  with the remainder being 21% Syrah and 17% Bonarda.  Bonarda is an old-school Argentinian grape that was their primary variety prior to the Malbec explosion.
This wine pours a deep red, almost purple with aromas of plums and raspberry.  The fruit continues onto the palette with more raspberry, black cherries, and a touch of mild herbal notes.  The acidity is pretty mild, as are the tannins.
This wine is fruity and sweet, without much complexity or anything you'd look for in a more expensive wine.  It's a decent everyday type of wine, maybe enjoyed while watching a movie and eating pizza, but like I said earlier, blends tend to fall into two categories, funky or bland.  This one is clearly the second type.
Drink This: if you want a simple, everyday fruity red wine.
Don't Drink This: if you're hoping it's as good as Bodega Elena de Mendoza's Malbec, because it's not.  Their Malbec is far superior, in my honest opinion.
Posted by Unknown at 1/05/2012 1 comment: