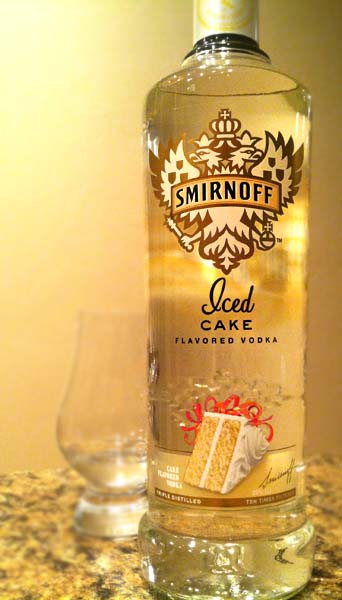 I swear they come out with two new flavors of Smirnoff every month or two.  Last time it was Fluffed Marshmallow and Whipped Cream, but now it's Kissed Caramel and this bottle, the Smirnoff Iced Cake Vodka.


Now, I'm not prejudiced against Smirnoff vodka like some reviewers.  I've had moderate success in getting my wife to drink different Smirnoffs, even though she's picky as Hell (check out reviews of the Whipped Cream and Fluffed Marshmallow vodkas).  But, I continue to try to find things she will like drinking.  It has been a long-standing goal of mine, or should I say, crusade.  That's probably more fitting, especially since the bulk of what I've bought for her to drink she hasn't liked.  Then I end up having to drink it since I hate having a bottle sitting around that nobody is going to drink.  Poor me.

Regardless, here we have the Smirnoff Iced Cake, another 60 Proof flavored vodka from Smirnoff.  It's still weird to me that all these new flavors are always only 60 Proof.  I'm guessing that's because the people who are going to be drinking this vodka *cough* girls *cough* really don't want to actually taste any alcohol in their cocktails.  Fair enough.  Let's take a look at this booze...

The Smirnoff Iced Cake Vodka smells remarkably like yellow cake with buttercream frosting, especially when you smell it straight from the bottle.  Pouring it into a Glencairn glass as I did really brings out the harshness of the alcohol, but hey, I'm a booze geek and I like tasting things from a Glencairn glass.  I'm will to bet I'm the only person who has tasted the Smirnoff Iced Cake Vodka out of a fancy pants whisky glass.  That's a win for me.  But seriously, I was surprised how much this actually smelled like yellow cake and buttercream frosting.  Tasting it... not so much.  It tastes a lot like Smirnoff's Whipped Cream Vodka, quite a bit of buttercream,vanilla, and artificial sweetner flavors, although here they are more muted than in the Whipped Cream Vodka.  The finish, drinking it straight of course, is quite bitter and a bit minerally, reminding you that this is, indeed, vodka.

Granted, this vodka isn't meant to be sipped neat out of a Glencairn glass.  It's more for iced shots or cocktails.

Speaking of mixed drinks and recipes, I tried this with orange juice and it wasn't what I was expecting.  The Whipped Cream Vodka with orange juice tastes like an creamcicle, but with the Iced Cake Vodka it ends up tasting more like a toned down screwdriver with some extra sugar oddly enough.  Mixed with apple juice it ends up tasting almost like an apple pie, which quite honestly kind of weirded me out.  I tried it with Coca Cola and that also tasted kind of weird.

So, what does that leave us to mix it with?  Probably other fruit juices would be good: cranberry, raspberry, pomegranate, pineapple, lemonade, that sort of thing.  Pretty much any flavors you might find in a cake would go with it.  Imagine that.  Unfortunately I just didn't have any of those other juices to mix it with this time.  Oh well.

Drink this: if you want another sugary flavored vodka from Smirnoff, although one that's a little more toned down than their Fluffed Marshmallow and Whipped Cream vodkas.  My wife loves the way the Iced Cake Vodka smells.  But, she also Loves cake with a capital L.
Don't Drink This: if you're not into sweet drinks.  Or you're a man.  This is about as girly as vodka can get.