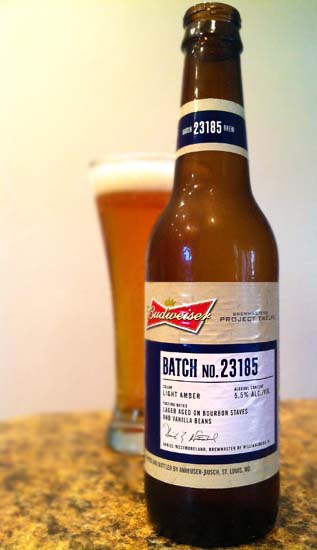 Well, it's been a long time since I reviewed a Budweiser beer.

Back when I started this website, I reviewed Bud Light Lime which was actually only my second review ever on here!  Talk about crazy!


It's been a couple of years since then and here I am... with another Budweiser.  This beer is part of Budweiser's new Project 12 which quite honestly, just seems like a way to try tapping into the craft beer crowd.  Not that anyone thinks Budweiser is a "craft" brewery, but apparently they're trying to change their image and be more accepted by the craft beer drinkers.  I doubt they can change their image much much since they're pretty much the pinnacle of mass-produced pale, watery American lagers.  But, I digress.

This beer is Batch No. 23185 whose recipe was developed by Daniel Westmoreland from the Williamsburg brewery.  It uses the standard Budweiser yeast, but comes in at 5.5% alcohol and is aged on bourbon barrel staves with vanilla beans.  Now if I heard that about a craft beer, I'd expect a ton of flavor, but considering this is Budweiser we're talking about, my hopes weren't too high...

Budweiser Project Twelve Batch No. 23185 pours a clear light amber color with a surprisingly thick, lasting white head.  It smells quite mild with dominant notes of bread and yeast, and subtle hints of maple and vanilla.  Tasting brings a crisp, light feel with flavors of lightly-roasted sweet malts, a touch of oak, and some light butterscotch and very tame vanilla in the finish.

Quite honestly, this was better than I was expecting.  It's still really quite mild and has the stereotypical Budweiser crispness, yet it's a helluva lot better than regular Budweiser and Bud Light.  Compared to real craft beers, though, it falls a bit short in flavor.  You'd think that between the bourbon barrel staves and the vanilla beans that there would be a bit more flavor.  The upside in my mind is that this may get regular Budweiser drinkers into branching out and trying new beers.