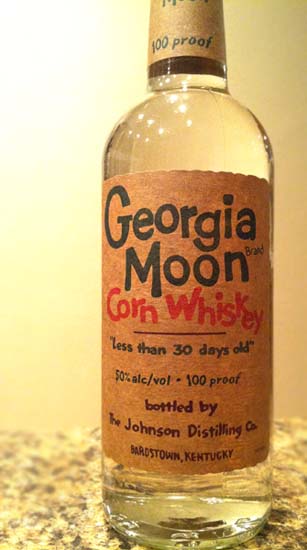 I've reviewed and tasted a few unaged and/or barely aged white lightnings, white dogs, white whiskeys, moonshine or whatever you want to call them over the past couple of years.  And generally, they're a bit underwhelming and overly sweet.  The only exception was Germain Robin's Low Gap whiskey which is far and above the best white whiskey I've ever tasted. So now, we have another in the lineup, The Georgia Moon Corn Whiskey.


Georgia Moon Corn Whiskey is a pure corn whiskey produced in Kentucky by the Johnson Distilling Company.  I got a real bottle of it, but I've also seen it come in a mason jar.  Granted, this isn't real moonshine of course, but it is a corn whiskey (like most real moonshine) and is aged less than 30 days.  And why is it Georgia Moon when it's distilled in Kentucky?  I haven't a clue.  Maybe they thought Georgia sounded better and perhaps Georgia is more of a moonshiner state.

As most of you know, bourbon has to be at least 51% corn to be considered bourbon.  Corn is what gives bourbon its signature sweetness.  But, there's a reason why distillers mix rye, barley, and wheat into the mash, because on it's own corn whiskey can easily become cloyingly sweet.  Granted, aging in oak will tone down the sweetness and add new lovely notes, but for white whiskey, the aging isn't long enough to do much.

Georgia Moon Corn Whiskey pours crystal clear like vodka, gin, or white rum.  It smells strong and sweet and very much of corn liquor, corn syrup, and a bit of rubbing alcohol and gasoline.  And while that might sound unpleasant, I actually kind of like the smell is some weird sort of way.  But then again, I'm kind of a freak.  Tasting bring something akin to the flavors of eating creamed corn with corn syrup drizzled on top, with an oddly ether-like alcohol burn and a short finish that doesn't linger at all.

All in all, not the best white whiskey I've ever tried.  Not even close.  Not even in the top 5.  But, I'll still drink it.  Yes, it's cloyingly sweet and a bit harsh.  But if you want to be able to pick out the sweet corn notes both in aroma and taste in whatever bourbons you try, I recommend at least trying it.  Drinking it to help your tasting abilities is a lot like trying different things (ex. cigars, stone, dirt, currants, various berries) to help you better taste wine and pick out the notes, and I'm all for that.

Drink This: if you want to try a relatively cheap (about $14) barely aged corn whiskey/white dog/white lightning.  Like I said, even if you don't like it, it'll help you better pick out the corn notes in bourbon.
Don't Drink This: if you're looking for a white dog that isn't overly sweet, because this one most definitely is.