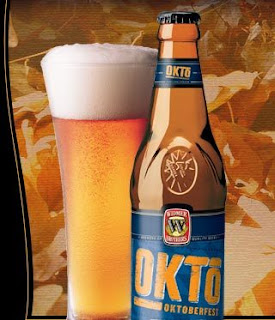 Okto - Festival Ale
Widmer Brothers Brewing Company
German Altbier/Oktoberfest Ale
IBU's: 25
Alcohol: 5.5%
Widmer Brothers make a variety of different beer styles, although their hefeweizen seems to be what they are most famous for.  And with their Hefeweizen, many people seem to add a slice of orange, which I find interesting, yet odd.  Personally, I'd rather not add fruit to my beer.  If I want fruity beer, I will just get a flavored lambic, but hey that's just me.  Last year, however, Widmer Brothers released Okto, an Oktoberfest ale in the classic German altbier style.  Honestly, this was my favorite overall Oktoberfest seasonal beer last year, although there were a couple others I tried that were stiff competition.
Poured, it is actually a bit darker than the picture shows, a dark copper color.  The smell is exactly how an Oktoberfest ale should smell, warm, moderately hoppy, caramely, with an almost wheat-like background.  Taste-wise, it was exactly how one would expect from the smell: sweet, malty, wheat-y, with some lingering hops.  It is perfect for the Fall months and really quite easy-drinking and delicious.  I stocked up on this while I could and drank a few six-packs over the course of last winter.
While checking out the Widmer Brothers website, I noticed they have changed the label for this year's Oktoberfest (Okto) release and lowered the ABV from 5.5% to 5.3%, although interestingly, the IBU's have gone from 25 to 28 for the new release.  It will be interesting to see how the 2011 version compares to last year's.  I hope it can compete with last year's.  We shall see!
Drink This: if you want a classic, well-balanced German-style altbier, perfect for Oktoberfest.  I just hope the 2011 version is as good as last year's.  Goes well with bratwurst and sauerkraut, but don't most beers?
Don't Drink This:  if you don't like beer or glasses of deliciousness.  But hey, if you like beer and it's the Fall, then definitely see if you can at least try this.  When I think Oktoberfest, I think of beers like this. Grab a glass, put on your lederhosen, and enjoy!  :) 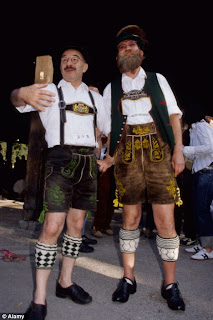 This isn't my photo, but this is what you should look like when drinking Okto, preferably at a beer fest...
Posted by Unknown at 7/28/2011 No comments: 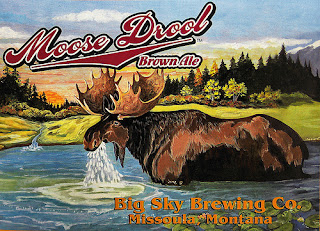 Moose Drool
Big Sky Brewing Co.
Brown Ale
5.1% Alcohol
For those unfamiliar with Big Sky Brewing Company, they are out of Missoula, Montana.  Moose Drool is their signature beer, and reportedly one of the best-selling beers brewed in Montana.  And fortunately, that's for good reason.  I am not sure how they got the name, Moose Drool.  If nothing else, it gets people's attention and that alone, is a good marketing tool.  Real drool from a moose tastes like shit, or so I imagine.  I really don't know.  Don't judge me.  Luckily, this brew does not taste like its name.
Moose Drool is a pretty straight-forward Brown Ale.  It is a rich, dark brown color, but not as dark as a porter.  It smells like dry cocoa and malt.  The taste is that of a dark, toasty malt and grains.  Any hops in this beer seem to be hiding behind the maltiness.  Nothing really out of the ordinary in the smell or taste department, pretty standard, but well done in that.
The thing that kind of bugs me about this beer is how thin it is.  It is almost too watery for my tastes, but then again, perhaps all the imperial stouts I drink have made me biased.  One good thing about it having a thinner feel is that you can drink it year-round as it remains somehow light enough to drink during hot weather, unlike things such as imperial and oatmeal stouts which are best enjoyed during snowstorms while wearing a sweater and stroking your beard.
Regardless, this remains a classic Brown Ale and has a reputation as being many people's preferred Brown Ale.  It is not great, but it is certainly good and makes for an easy-drinking everyday beer that most people seem to enjoy.  I recommend at least trying this once, especially if you're not familiar with Brown Ales.
Drink This: if you want a classic Brown Ale with just enough flavor and depth to please beer snobs, while still being accessible to those who drink watery American lagers.
Don't Drink This: if you don't like beer.  This beer is a good classic and appeals to a wide array of beer drinkers.  It is nothing revolutionary or over-the-top, but it is a standard example of what Brown Ale should be.
Posted by Unknown at 7/27/2011 No comments: 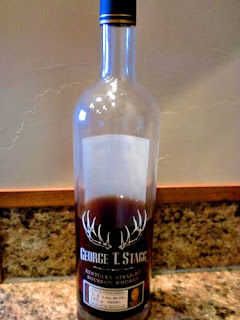 George T. Stagg 2010 Release
Buffalo Trace Distillery Antique Collection
Barrel-Proof Kentucky Straight Bourbon Whiskey
71.5% Alcohol (143.0 Proof)
Now this, this is what whiskey is all about.  This is the 2010 George T. Stagg release from Buffalo Trace as part of their Antique Collection.  Their Antique Collection, as a whole, are some of the best whiskeys a person can buy and at a fantastic value.  I believe I only paid $62 for this bottle, although I have heard that many states are charging considerably more.  Regardless, that's a steal for this quality of bourbon at barrel-proof.  This whiskey is barrel-proof, meaning it is not watered down like most whiskeys.  Barrel-proof essentially lets you taste whiskey the way the master distillers do straight from the barrel.  This is about as in-your-face as a whiskey can get, yet somehow delicate and refined.  I prefer to drink this neat in a Glencairn glass with a splash of water depending on how quickly I plan to sip it.  Generally I drink whiskey neat, but at 143 proof it may be a bit strong to drink without the water for most people.  This whiskey is about as full-flavored as they come, with very prominent notes of very dark maple and brown sugar in both smell and taste.  This mapley taste is not overly sweet like some whiskeys, but just sweet enough to make you want some more.  Don't get me wrong, with the strong maple and brown sugar notes, it will still put hair on your chest, while still being smooth considering the proof.  It does seem a bit more flavorful actually than what I remember of the 2009 release, yet all of them are worth picking up if you can find a bottle.  They are actually quite hard to find in most states unless you can somehow reserve a bottle like I do.
Drink This: if you love ridiculously awesome full-flavor, hardcore yet balanced bourbon.
Don't Drink this: if you are accustomed to Southern Comfort or other panty-waist wannabe whiskeys, if you think Jack Daniels is "too strong," or if you like to mix your bourbon.  This is NOT a whiskey for mixing.  If you mix this with cola, I will personally fly to your home and steal the bottle.  Then probably punch you in the throat. 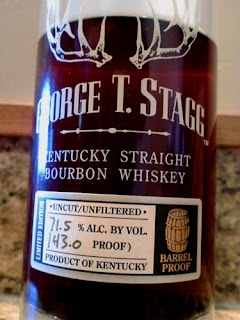