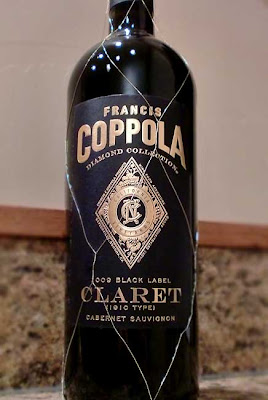 Francis Coppola
Black Label Claret
Diamond Collection
Cabernet Sauvignon Blend
Vintage: 2009
Origin: California
Alcohol: 13.5%
I'm sure most of you have seen The Godfather movies and Apocalypse Now.  They're classics.  But, did you realize that the guy who directed those movies, Francis Ford Coppola, also owns a winery?  And a great one at that?  It's true.  And while this isn't as surprising as someone like the singer for Tool owning a winery (yes, Maynard James Keenan does own a winery), it's still interesting nonetheless.
Francis Coppola owns his own winery, but he's also produced 73 films, directed 33, but who knows how many he's written and done other things with since the 70's.  And while movies may be his main focus and love, it's clear that he cares a great deal about his wine.
The Francis Ford Coppola winery makes a whole host of great California wine including just about every major varietal and few lesser known ones.  They also have several different lines ranging from basic table wines to the Diamond Collection to limited production releases.  Apparently the head wine maker Corey Beck likes a whole lot of variety in the types of wine he makes.
For now, I am looking at the 2009 Francis Coppola Diamond Collection Claret.  The term "Claret" was originally a British term used to describe Cabernet Sauvignon blends, like Bordeaux for example.  This particular one is 81% Cabernet Sauvignon, 9% Petit Verdot, 5% Malbec, 3% Merlot, and 2% Cabernet Franc.  The Claret is actually the Francis Coppola Winery's signature red wine... and for good reason.  It's delicious.  The Claret pours a dark garnet and has aromas of complex dark fruit and cherry.  On the palette I got more of the cherry flavor, pomegranate, some dry berries, the mildest touch of oak and cocoa, and a bit of white pepper in the finish.  The tannins are moderate, but still rather tame.
Overall, this was a very smooth, tasty, drinkable wine.  This is the kind of wine that you could easily drink several glasses of in one sitting and still be pleased with its flavor and balance.  I can't really see anyone finding anything wrong with it, especially in its price range.  It's no wonder this is the Francis Ford Coppola Winery's signature red.  I may have to pick up a couple more bottles.
Anyway, go check out the Francis Coppola Winery's Facebook page, Twitter, and website.  Tell them Bob sent ya'!
Drink This: if you want a tasty, extremely drinkable Cabernet Sauvignon blend.
Don't Drink This: if you don't like red wine.  If you do like red wine, there's really no reason not to try it.  There's nothing challenging or off-putting about this wine at all.  It's a great blend.
Cheers!
Posted by Unknown at 11/11/2011