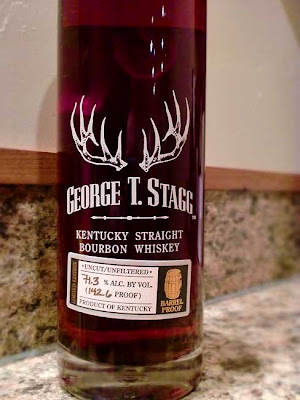 If you get into the bourbon drinking world at all, there's one bourbon that comes up in conversation time and time again.  For many (including me), it's the epitome of what bourbon can, and should, be.
It's the infamous George T. Stagg.

Personally, I've never had a George Stagg bourbon I didn't like and I've had several bottles yearly the past few years.  I reviewed last year's (2010) bottling here.  As usual, every Fall the Buffalo Trace Distillery releases its Antique Collection, a limited yearly release of five whiskeys: George T. Stagg, William Larue Weller, Sazerac, Eagle Rare, and the Thomas H. Handy.  I've already formally reviewed the 2011 William Larue Weller, a wheated bourbon, which I thought was better than last year's bottling.  For now, I'm going to focus on the big daddy of them all, the George T. Stagg, but the other reviews should be coming soon, as well.

Fortunately, I still had some left from one of my opened 2010 Stagg bottles so I could compare them side-by-side.  Granted, the already opened 2010 bottle is likely a little mellower since that happens after a bottle has been open for a month or two.  But, it still made for a good comparison.

The 2011 Release George T. Stagg pours a slightly lighter color than the 2010, but still with the distinct dark, auburn color.  It smells very similar to last year's, with overt smells of dark maple and brown sugar.  Even though it has slightly less alcohol than last year's, the alcohol smell it more pronounced in the nose.  Granted, this could be because this 2010 bottle has been opened for a couple of months, giving it time to mellow like I said earlier.  The 2011 tastes of strong, smokey dark brown sugar, oak, vanilla, and some maple in the finish.

This is clearly less sweet than last year's release (and a couple of the years before that), both in smell and taste, but for some people that could be a welcome change.  The staple Stagg characteristics are clearly there, making this easily still one of the best and most hardcore bourbons out there.  Make sure to drink it with a splash of water to experience the full flavors.

Personally for me, of the 2011 Antique Collection releases the William Larue Weller might actually be tied with big daddy Stagg... and that's saying something.

Drink This: if you want one of the finest, most flavorful barrel-proof bourbons around.  (If you can find one, I suggest also buying a 2010 or 2009 release since they're slightly more balanced in my opinion, but they are awfully hard to come by now and might cost quite a bit more)
Don't Drink This: if you want a bourbon to mix or if you think Jack Daniels is "too strong."  This 142 Proof beast will tear you up if you're not already accustomed to drinking high-proof bourbon neat.  And no, taking shots doesn't count.