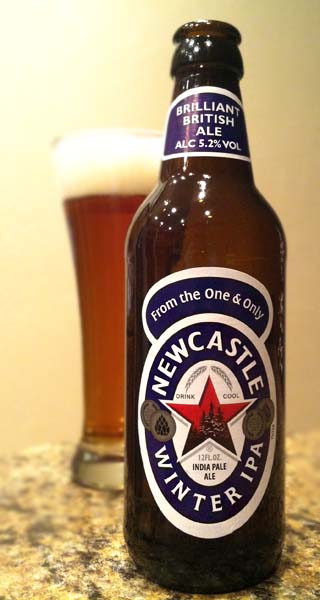 It's officially 2013 and officially freaking cold!  I don't know about you guys, but it has been cold here, as in ungodly cold.  Like -5 to -10 degrees Fahrenheit, with windchills down to -20 degrees.
Now that's hardcore.

And what better to hit the spot when the weather gets crazy cold than... a Winter India Pale Ale.  The Newcastle Winter IPA to be precise.
Now I've reviewed a considerable amount of IPA's here at Bob's Brew and Liquor Reviews, but I have yet to formally review a Winter-style IPA.  Not that I haven't tasted other Winter-style IPA's before, I just haven't reviewed any of them until now.

If you enjoy Newcastle Brown Ale, check this one out.  The Newcastle Winter IPA is an English IPA.  Now if you know anything about IPA's, you'll know that English Pale Ales and English India Pale Ales tend to be milder than other IPA's with a less spicy hop presence and more of the classic English maltiness.  So does this beer fit that profile?  Well, let's see...

Newcastle Winter IPA comes in at a pretty standard 5.2% ABV with a bitterness of only 28 IBU's.  Like I said, English IPA's tend to be milder.  It pours a clear copper color with a frothy white head.  The color is noticeably darker than most IPA's which is likely fitting in the Winter theme.  It has aromas predominantly of moderately roasted malts and some piney hops.  Tasting brings quite a bit of caramel and whole grain bread flavors followed by a grapefruity hop presence that seems to have a bit of pine and a hint of spice.  The mouthfeel is smooth and slightly creamy which works quite well here.

Bottom line this is a solid, yet mild IPA.  Like I already said, being that this is a British IPA, the mild hops are expected.  The great thing here is that this is essentially an Amber IPA that tastes almost like a Winter Warmer because of the way the hops play into it, lending a nice, mild spiciness in addition to the creaminess.  This isn't a massive beer, but it really is quite drinkable.  I could easily see myself drinking a couple of these in a sitting.

Drink This: if you want to try something different from Newcastle that's a solid choice for the colder months.  Even if you don't typically like IPA's, there's a good chance you'll like this one.
Don't Drink This: if you're looking for a massively heavy Winter brew such as an Imperial Stout.
Cheers, my friends!
Posted by Unknown at 1/03/2013