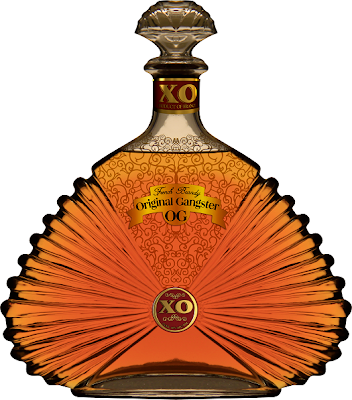 You may know him from the 90's rap group Body Count (rapping "F*** the police!"), from his solo rap career, from seeing him in the tabloids with his badonkalicious wife Coco, or perhaps from the hit show Law & Order: SVU, but wherever you know him from, there's no doubt that Ice-T knows how to make an impression.  So, when I heard that Ice-T had his own line of brandy, I was intrigued.  Granted, my expectations were varied considering the nature of any celebrity-endorsed alcohol.  Fortunately, those expectations were easily met and then some.

Now Original Gangster XO isn't just a cheap American brandy, this is real French brandy aged a minimum of 10 years.  I'm not sure exactly where it's distilled or by who, but Ice-T apparently got somebody who knows what they are doing to make it.  I've heard some people say that the bottle is tacky, but honestly I kind of think it's cool.  I tend to either like the modest, humble bottles (ie. Van Winkle Lot B boubon) or the wild, over-the-top crazy bottles of booze.  Sure, this fits the latter, but it just plain looks cool in my liquor cabinet amongst all the boring, similar looking bottles.


The Original Gangster (OG) XO brandy pours a wonderful golden hue just as it should.  It has fairly mellow typical brandy aromas, distilled wine and hints of caramel.  On the palette, you get fruity, semi-sweet brandy, some raspberry, and a slight touch of oak.  The finish is smooth and gentle and easy enough to drink neat or on the rocks.

This is not the sweetest brandy I've had, nor is it the smoothest.  Yet it really is superbly smooth and easy to drink in its own way especially considering its youth (in brandy terms) and relatively low price.  It seems to strike a great balance between all of its elements and for the price, it's really a great value.

Even though some may be turned off by it's name or the bottle, they should look past that because this is a high quality, tasty, smooth brandy.  It's as good as many brandies I've had that cost twice this much.  It's not quite as good as the pricey Germain-Robin brandies, but honestly I would say I would drink this before Courvoisier any day of the week, which is saying something!!!  Truly, I was surprised with how good this brandy was.  Go find some and try it.  It's cheap and the bottle will stand out on the rest of your liquor cabinet if nothing else, so why not!

Drink This: if you want a cheaper brandy that can stand up with stuff that costs twice as much.
Don't Drink This: if you're looking for a delicate, rare extra-aged brandy.  Stick with the crazy expensive stuff if that's what you want.  However, this seems to strike the perfect balance between cost and quality as far as brandy goes.  It's hard to find a bottle of 10 year-old French brandy this cheap ($25-$30 or so a fifth) that is this smooth and tasty.  Ice-T seems to have struck gold here... and I'm not just saying that because he's a gangster...