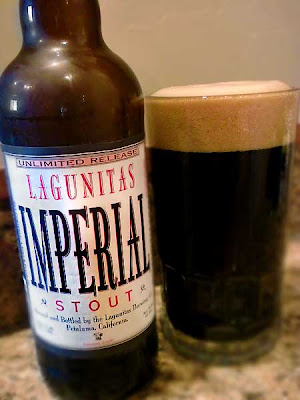 Lagunitas Imperial Stout
IBU's: 72.45
Alcohol: 9.9%
Like I said when I reviewed Lagunitas Brewing's Hop Stoopid Ale, not all of Lagunitas regular beers are anything special.  They make several average brews (at least as far as craft beer is concerned), but fortunately they have a couple stand-out gems.  Hop Stoopid Ale is one, as is this one, the Imperial Stout.
Now, I've said it before and I will say it again here, I love Imperial Stouts.  Granted, since I've been on a quest to try as many as I can, I have had a couple not so great ones (many of which I still need to write up a formal review for), but for the most part, they continue to be my favorite style of beer.
So, here we have the California-based Lagunitas and their Imperial Stout.  This puppy is 9.9% alcohol and a moderate 72.45 IBU's (bitterness).  Neither the alcohol nor the bitterness rating is all that exceptional for an Imperial Stout, but hey, high numbers don't necessarily make it any better.
The Lagunitas Imperial Stout pours pitch black with a moderately thick, tan head.  It's not as thick and creamy as something like Nøgne Ø Imperial Stout, but it's decent.  It smells of sweet, dark roasted malts, with hints of maple.  You take a sip and get notes of sweet raisins, licorice, and bittersweet chocolate.  The hops are virtually hidden here, but could just be playing into the bittersweet chocolate notes.  While the flavors here are good, they are a bit different than most Imperial Stouts in that any coffee/espresso notes are subdued, although the licorice/anise taste is unique.  Granted beers like Stone's Belgo Anise Russian Imperial Stout or Uinta's Labyrinth have anise is spades, whereas it's more subtle here.  Regardless, this is a good beer, but for an Imperial Stout it's bordering on boring to mediocre (even though it's one of Lagunitas' better brews).  Maybe I'm getting jaded and snobbish after tasting so many drinks, but sorry Lagunitas, I prefer your Hop Stoopid Ale...
Drink This: if you want a middle-of-the-road Imperial Stout.  Is it better than many beers out there? Hell yes... and I wouldn't pass this up if offered one.  But, in the realm of all Imperial Stouts, this remains mediocre.
Don't Drink This: if you want an in-your-face, hardcore Imperial Stout like one from Stone Brewing or Beer Valley's Black Flag.  Conversely, don't drink this if your drink of choice is Natural Light or something equally as vapid.
Posted by Unknown at 12/10/2011