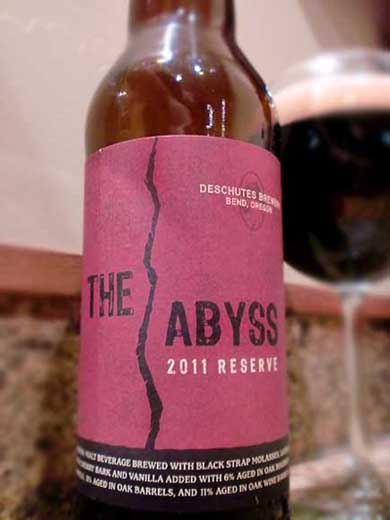 The Abyss
Deschutes Brewery
Bend, Oregon
Vintage: 2011
Imperial Stout
IBU's: 65
Alcohol: 11%
There are a few beers that are hyped more than others within the craft beer community including several stouts from Founders Brewing Company, the Dark Lord from Three Floyds, Russian River's Pliny the Younger and Elder, and this bad boy The ABYSS.
The Abyss is an Imperial Stout from Deschutes Brewery out of Bend, Oregon.  Now, they make a hell of a lot of great beer (ie. Inversion IPA, Obsidian Stout, Jubelale, and several of their other yearly releases), but this one takes the cake as their crowning achievement.  And well, I'm not going to beat around the bush, it simply beats the hell out of most other brews out there.
The Abyss is a massive 11% ABV and a decent 65 IBU's.  It is brewed with black strap molasses and licorice.  Vanilla and cherry bark are added partway through the process to help flavor the beer.  6% of this beer is aged in oak ex-bourbon barrels, 11% is aged in plain oak barrels, and another 11% is aged in an undisclosed varietal of ex-wine oak barrels before being blended together with the remaining 72% and bottled.  The result is an incredibly complex, amazingly balanced beer.
It pours as black as the Devil's soul with a thick, light brown head.  It smells of dark roasted, toasted malts and sweet vanilla.  You take a sip and get smacked in the mouth with a creamy mouthful of bittersweet chocolate, vanilla, anise, dark roasted coffee, strong oak which reminds me of an aged Old Vine Zinfandel, dark sweet fruit in the mid-palette, and tobacco and a moderate bitterness (hops and licorice?) in the finish.  After each sip there is a lingering toasty, oaky, almost grilled flavor.  The 11% alcohol is completely hidden somewhere within this dark beast of a beer.  Somehow this beer stays balanced amidst all of the strong flavors, while still being creamy, smooth, and lusciously dark.
Don't drink this brew ice-cold, let it warm up a bit to really let the deep, complex flavors shine.  I wouldn't recommend this beer with food, as it would be a shame to have food cover up the wonderful flavors, although I could see having a dark, big ring cigar as suiting this bad boy quite well if the mood is right...
Drink This: if you want one of the best dark beers in production today.  There's a reason why The Abyss is hyped like it is... because it's great.
Don't Drink This: if you don't like awesome, incredibly rich and dark brews.  This is easily one of the best Imperial Stouts I've ever had.
Posted by Unknown at 12/28/2011