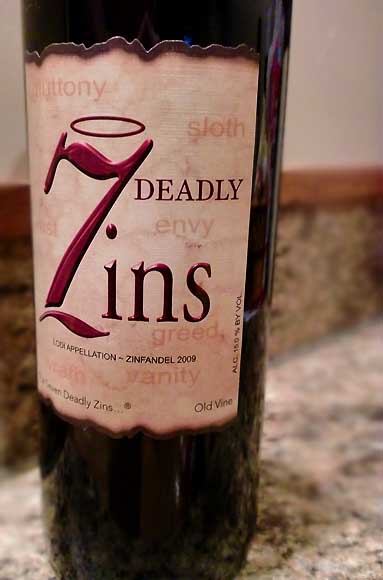 7 Deadly Zins
Old Vine Zinfandel
Vintage: 2009
Origin: California
Lodi Appellation
Alcohol: 15%
For me, Zinfandels tend to be rather polarizing.  They are either brilliantly delicious or overly oaky and harsh.  Now, of course I'm not talking about the other Zinfandel wine.  You know, White Zinfandel, the pinkish, sugar sweet wine that seems to be a favorite for girls of all ages.  I drink that and I feel like a princess... which isn't exactly my style... at all.  I'm talking about the standard red Zinfandel, the wine made using the grape skins.  I find it interesting that the two styles can be made from exactly the same grape yet be so drastically different depending on the process.
This particular bottle is the 2009 vintage 7 Deadly Zins, a blend of seven different Old Vine Zinfandels.  I've seen this bottle on many a store shelf, but for some reason have never tasted it until now.  I'm usually a sucker for cheesy names like this.
7 Deadly Zins pours a deep, dark garnet color.  It has a berry-filled nose with aromas of raspberries, cherries, blueberries, and some vanilla.  On the palette I get a rather jammy blend of blackberry, raspberry, and figs, with a strong amount of spice and oak in the lingering, smoky finish.  It is full-bodied, yet has pretty mild tannins all things considered.
I was actually surprised by this wine.  It was considerably better and more complex than I was expecting, yet it remains easy-drinking enough that I can see why a lot of people enjoy it.   It has berry and spice and everything nice...
Like I said at the beginning, Zinfandels tend to be either totally delicious or awful and harsh, with little in between.  This one, of course, falls into the first category.
Drink This: if you want a flavorful Zinfandel that is easy-drinking enough that many will enjoy it.  Plus at only around $10, it's hard to beat.
Don't Drink This: if you don't like dark red wines, but that's pretty much a given.  This isn't White Zinfandel, people...
Posted by Unknown at 12/21/2011