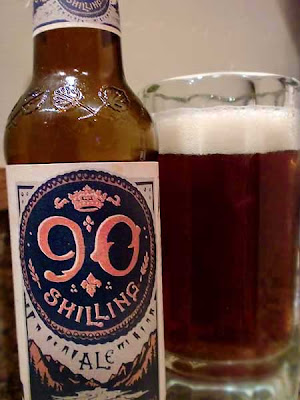 90 Shilling Ale
Scottish-Style Ale
Odell Brewing Co.
IBU's: 27
Alcohol: 5.3%
Once upon a time there was a guy named Bob.
Bob loved beer.
Bob's voice of reason (aka his wife) was out of town.
Bob subsequently decided it would be a great idea to attend the 17th Annual (2011) Mountain Brewers' Beer Fest anyway.
Bob made a poor decision.
The Mountain Brewers' Beer Fest is an annually held event with 140 breweries, 1200 types of beer, and around 6700 people in attendance.  While that's not huge by the German Beer Fest standards, it's a pretty damn massive event for us people here out West.
And it wasn't like I was trying to taste every single beer there, but I may have gotten close...  Too bad my wife wasn't there to tell me to slow down and pace myself.
For a frame of reference, here are some shots I took with my cellphone.  This first pic was right after I got to the Beer Fest.  (There were many huge tents such as this FYI) 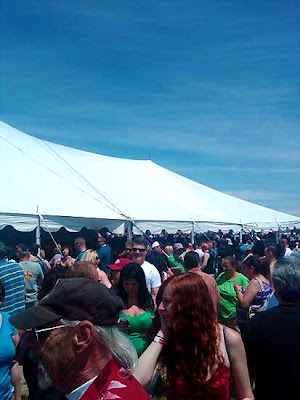 Fast forward one hour and who in the hell knows how many beers later and here is another pic I took of the crowd: 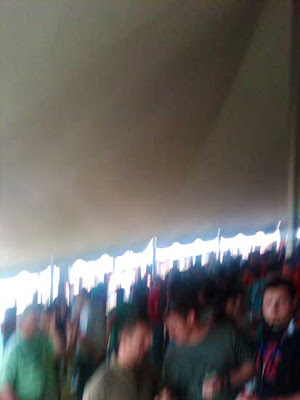 See any difference?  That's right.  I got wasted.
Getting drunk wasn't my goal at all for the Beer Fest, but more a natural result of me wanting to try as many delicious craft beers as I could shove into my pie hole.  After all, you only pay the entrance fee and it's as many beers as you want after that for no additional charge.  It's a pretty sweet deal.

Naturally, I went from brewery to brewery, lap after lap, around through the tents.  Fortunately (or perhaps unfortunately) the lines for the really awesome beers were spectacularly short since most people like shitty, watery beer, even at a beer festival.  The first lap I tried as many porters, stouts, and barley wines as I could.  Very good stuff.  The second lap was all IPA's.  Still good, good stuff.  The third lap, well that's pretty much a blur.

Then we tried to eat at TGIF's, which was stupid.  There's a picture I saw of my goofy drunk face chomping on a bread stick with one eye open.  Guess that's just how I roll.  Next thing I know, I'm laying next to a toilet puking on the tile floor.  Apparently I was confused about where my projectile vomit was supposed to go.  Why, oh why, did my wife have to be out of town?!  She's really the only person who reigns me in from being a complete idiot at times.

Anyway one thing is for sure, in my drunken, craft beer guzzling delirium on a sunny, 90+ degree day, one beer stood out for whatever reason: 90 Shilling Ale.  I remember going back over and over again for the 90 Shilling Ale and it tasted awesome.  So naturally, a couple weeks later I start looking for Odell Brewing's 90 Shilling Ale... and guess what, I found it.

Now, Odell makes some freaking delicious IPA's, especially their Myrcenary Double IPA.  I assumed that 90 Shilling Ale, their flagship beer, would be just as good as their IPA's especially with my fond memory of it standing out at Beer Fest.  Well, guess what?  It's not.

90 Shilling Ale pours a caramel-amber color and has malty, nutty aromas.  You take a sip and get subdued toffee, light malts, and a finish that's reminiscent of mineral water.  There are no hops that I can taste.  This is supposed to be a Scottish-style ale, but guess what?  It's like a mass-marketed Americanized version of one.  You know what I call that?  BORING.  This is watery and marginally better than Bud Light.  Maybe this really was better out of a keg at Beer Fest, but from my memory this bottled version tastes totally different.

Bottom line, this beer tastes better when you're hammered and it's out of a keg.
Sorry Odell, I will stick to your tasty IPA's.


Drink This: only from a keg when you're drunk at Beer Fest on a burning hot day.
Don't Drink This: if you dislike watery beers.  I don't understand how Odell's IPA's can be so delicious, yet their flagship beer is so... boring.
Posted by Unknown at 12/10/2011