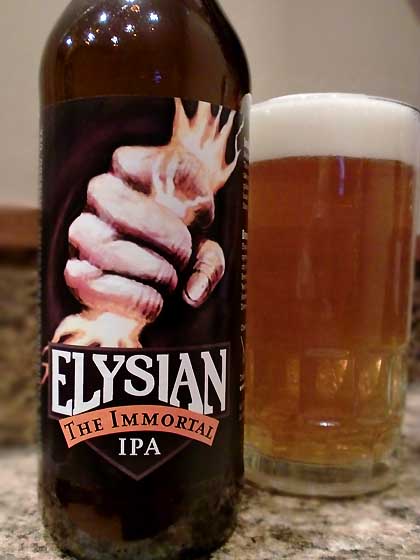 The Immortal IPA
India Pale Ale
Elysian Brewing Company
IBU's: 65
Alcohol: 6.3%
Make no mistake, I love hops.  The more hops the merrier.  So naturally, I love IPAs (India Pale Ales).  Especially double and triple IPAs, filled with gratuitous amounts of citrusy, piney, mouth puckering hops and a respectable amount of alcohol that makes you take small sips.
So, when I saw this brew, The Immortal IPA from Elysian Brewing I instantly wanted to try it.  I mean, look at it, it looks badass with the hand strangling the lightning.  I figured, hey this looks like a massive IPA worthy of my time.
Well, like so many other brews with cool names or labels, I bought it hoping the nectar inside would live up to the expectation.  And again, like many others, it did not.  Granted, this isn't as big of a let-down as IPAs like Rogue's Brutal IPA or Ninkasi's totally weak Total Domination IPA, but it was a let down nonetheless.
Elysian Brewing's The Immortal IPA pours a slightly hazy gold color with a decently thick head.  It has aromas of toasty malt and some mildly citrus hops (much less hops than you would expect from an IPA, off to a bad start).  You take a sip and get soft, sweet malts, some lemon and grapefruit notes, and a moderate dose of citrusy hops.  The finish lingers moderately, but is still rather weak.
Now, this isn't a bad IPA, it's just lackluster.  And with such a cool name and artwork, I (wrongly) expected more.  This is an easy-drinking everyday type of IPA to drink with dinner, not something to sip outside while you stare at the stars.
Drink This: if you want a basic, rather common-tasting IPA.
Don't Drink This: if you want a balls-to-the-wall India Pale Ale like Stone's Ruination IPA or Lagunitas' Hop Stoopid.  Personally, if I'm going to drink anything from Elysian Brewing, it's going to be one of their amazing pumpkin ales (they make several)...
Posted by Unknown at 12/22/2011