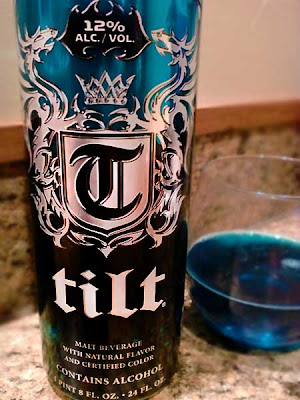 Tilt
Blue Raspberry
Malt Liquor
Alcohol: 12%
Yes, you are seeing correctly... I poured neon blue malt liquor into a stemless wine glass.  I'm fancy like that.
Speaking of which, a visitor to the blog a couple of weeks ago called me a "yuppie."  Well, technically he said "worst review ever. die yuppie scum!" (See for yourself).  This didn't bother me because his asinine comment was in defense of Olde English 800, the bastardly red-headed step-child of real beer.  And, yes, I expect some of that same heat for reviewing this God awful malt liquor called Tilt, although I don't think it garners quite the same cult following that Olde English 800 does.  I figure, in order to appreciate the good stuff, I need to remind myself how nasty some alcoholic beverages really can be.
Tilt along with several other malt liquors used to have caffeine and other stimulants in them, but the FDA deemed the alcohol/caffeine combination as "too dangerous."  Well, what about Irish Coffee or cola mixed with just about any mixer?  You never hear about the dangers of those combinations.  I figure it's just the result of politics and paranoid, hyper-protective parents.  Not that I care about caffeinated malt liquor, itself, but rather the principle of the argument.  Anyway, I'm off-topic now...
So, here we have Tilt.  This is the blue one, which as any candy eater knows, the flavor of blue is "blue raspberry."  As you can see from the photo, it's a crazy neon blue.  The can says "Certified Color."  What the Hell does that mean?  Why is it soooooo blue?  It's all a bit disturbing if you ask me.  You smell Tilt and get hints of underage drinking and pregnant prom queens... I mean, fake raspberry and sugar.  You take a sip and get hit in the palette with full frontal corn syrupy sweetness, artificial raspberry and blueberry, and a finish that I can only describe as fluoride.  Seriously, it finishes like mouthwash.  I figure all of this sweetness is an attempt to mask the poor quality of the alcohol contained in this and at 12% alcohol, they're needing a lot of sweetness to do that.
Tilt is easily one of the most disgusting things I've put in my mouth lately and you don't want to know what else has been in there.  Only joking.  But honestly, Tilt is vile.  I drank half the can which pissed off my stomach and gave me heartburn, then I poured out the rest.  And I never get an upset stomach from any booze.  This just isn't for me.  Maybe I am a "yuppie" after all.
On a more positive note, the cost-to-alcohol ratio is decent being that this is 12%.  Granted, there are cheap wines and bottom shelf vodkas in plastic jugs that cost about the same.  But, if you don't want those and you don't give a shit about flavor and quality, here you go!  Drink up!
Drink This: No. Don't.
Don't Drink This: if anything else is available.  Personally, I'd rather drink water.
Posted by Unknown at 12/03/2011