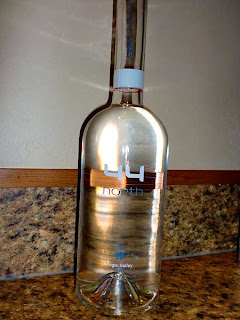 44° North Vodka
44° North Distillery
Wheat Vodka
40% Alcohol (80 Proof)
44° North Vodka is produced by the 44° North Distillery in Rigby, Idaho.  For those of you who don't know, that is pretty much in the middle of nowhere.  Nowhere, Idaho.  Anyway, they produce 3 different vodkas: their standard unflavored, Mountain Huckleberry, and Rainier Cherry.  What I find interesting is that while the two flavored versions are made from Idaho potatoes, real huckleberries and cherries, and bottled at 70 proof, their standard unflavored version is made from "Magic Valley Wheat," or Idaho Winter Wheat (Brundage) and bottled at 80 proof.  I am curious as to why there is a variation between potatoes and wheat, and why they don't make unflavored potato vodka.  I have had unflavored potato vodka from other distillers, perhaps theirs is on its way?
Here's what 44° North has to say about its vodka:
44° North Vodka is "North of Center." It's rugged, authentic, and yet refined. North of Center is a state of mind that's wide-open and defiantly optimistic, much like the great people of Idaho. 44° North is about exceeding expectations-above the mainstream and off the middle-of-the-road.
Some think you can't bottle the independent spirit. We just did.

Well, that certainly sounds optimistic, maybe too optimistic.  They go on to say: 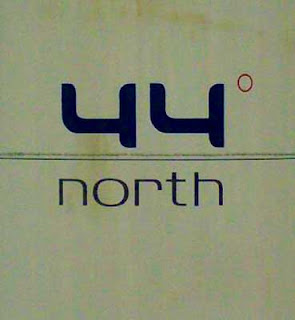 Idaho Potatoes and Brundage Winter Wheat along with Rocky Mountain spring water produce a smoother vodka without the bitterness. 44° North Vodka accomplishes this with a five-column, multi-plate, distillation process that elevates the proof of the alcohol being distilled as it strips out virtually all impurities.

Okay, so 44° North uses some fancy vodka distilling equipment, local wheat and potatoes, and local delicious Idaho water.  Does it live up to the hype?

44° North Magic Valley Wheat pours clear as air and smells like, well, nothing.  Some vodkas, okay most vodkas, have a distinct smell, with the cheaper ones being reminiscent of rubbing alcohol.  It sucks, but it's true.  44° North smells like nothing.  That's right, nothing.  It could just as soon be water for all I know.  Upon sipping it, I am greeted with a very clean, crisp, cool taste with remarkably no alcohol burn.  It does have a mild mineral-like aftertaste much like fancy bottled waters, perhaps from the mineral-rich Rocky Mountain water.  That is really the only flavor I can detect.

This is easily one of the purest, smoothest vodkas I have had the pleasure of tasting.  It is up with many more expensive vodkas in terms of quality and taste.  It works quite well neat or on the rocks.  Or if you want to be like The Dude from The Big Lebowski, you can always make a White Russian.  But in this case the extra-smooth vodka could cause you to make an extra strong drink.  Not that The Dude would mind...

Drink This: if you want an extra smooth, wheat vodka made by a craft distiller in the middle of nowhere that's on par with the big distillers in terms of quality and taste. I still have yet to try their flavored potato versions...
Don't Drink This: if, well, ...okay you have no excuse.  Everyone likes vodka.  It goes with everything or on its own very nicely.  If you've had bad experiences with nasty vodka in the past, I recommend giving this a try.  This is good, good stuff.
Posted by Unknown at 8/23/2011