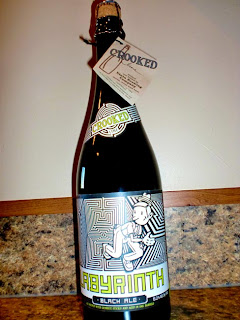 Labyrinth
Black Ale
Uinta Brewing Company
IBU's: 56
Alcohol: 13.2%
Labyrinth is one crazy beer.  In a good way.
Labyrinth is a black ale brewed by Uinta Brewing Company out of Salt Lake City, Utah.  Labyrinth is part of Uinta Brewing Company's "Crooked Line" of beers, a set of experimental brewing that turns out some exciting beverages.  Labyrinth won a gold medal at the 2010 North American Brewers Association Awards in the Imperial Stout category.
This is clearly no normal black ale.  This thing is brewed with licorice sticks and aged in oak barrels.  And boy, can you tell.  Labyrinth pours ridiculously black and opaque.  It smells like dry licorice, dark chocolate, and roasted malt.  Taste-wise is where this thing hits hard.  I have had some beers brewed with licorice, but this thing has the most licorice flavor by far!  It tastes like strong, dry licorice and straight espresso with some dark roasted malts holding up the base.  The alcohol does make itself present and seems to linger in the finish, but at 13.2% ABV what do you expect? This beer isn't for sissies.
This is clearly not a beer for most people.  This thing is strong, dark, and full of flavor that smacks you in the face.  It was good on its own, but surprisingly great with warm chocolate cake.  It seemed like the two were made for each other.  I have never tasted a beer that went so well with chocolate.  Seriously.
Try This: if you want a beer that will smack your taste buds around.  This thing is not for novices to the craft and experimental beer scene.  It is extreme.  Perhaps too much for most. But if you're into dark, ridiculously flavorful, high-alcohol beers, this thing is delicious.
Don't Try This: if you hate black licorice, if you think Guinness is "too dark," or you think Samuel Adams Boston Lager is "too flavorful."  If you normally drink Bud Light, you are a little bitch ...and this beer will kick your ass. 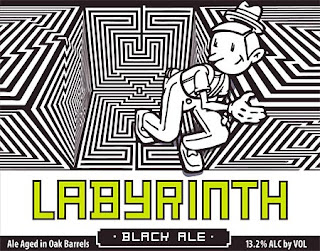