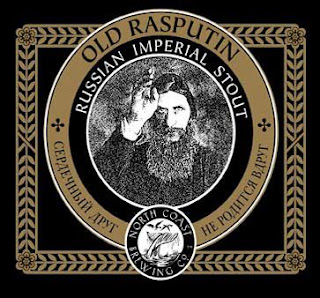 Old Rasputin Russian Imperial Stout
North Coast Brewing Co.
IBU's: 75
Alcohol: 9%
There is a reason why Old Rasputin Russian Imperial Stout is well-loved by those who enjoy dark beers: because it kicks ass.  Old Rasputin is made by the North Coast Brewing Company out of Fort Bragg, California. I'm sure they make other delicious beers, but who cares, Old Rasputin is all you need.
This beer is named after Grigori Yefimovich Rasputin (1869-1916), a Russian who was reported to be a mystic, prophet, and healer.  He had substantial influence over the Russian emperor of the time and was eventually murdered.  He was poisoned, then shot four times, then finally thrown into the Neva River where he drowned.  Apparently he was a tough bastard who refused to die.  That's why his pretty face adorns this bad ass beer bottle.

Old Rasputin pours black as black can be, with a good thickness.  It smells like dark chocolate, coffee, and toasted malts, with some distinct hops.  In other words, it smells awesome.  It tastes like a stout should: dark and roasty and thick, although it does actually have a less hoppy taste than I would imagine.  You can barely taste the presence of the higher ABV (9%), but only barely.  It is really quite well-rounded, but not in-your-face like some other Imperial Stouts I have tried.  It is almost subdued and easy-drinking for the Imperial Stout genre, if that even makes sense.
Compared to what most people consider "dark beer," aka Guinness, this blows it out of the water.  This makes Guinness seem like Mr. Rogers, and this is a tame Russian Imperial Stout!  If you haven't tried a beer in this genre and enjoy Guinness, try this! It will alter your perceptions of what dark beer can be.  And then, maybe you can start exploring the delicious world of darker, more extreme beers, as this really is quite mild for the genre.  If on the other hand you enjoy your Bud Light, Keystone, and Natural Light run far, far away. This beer is not for you.
Drink This: if you want something darker and more aggressive than Guinness, yet not extremely over-the-top like some beers can be.  This really is a fantastic introduction to the world of Imperial Stouts.
Don't Drink This: if you are a wussy.
Posted by Unknown at 8/02/2011