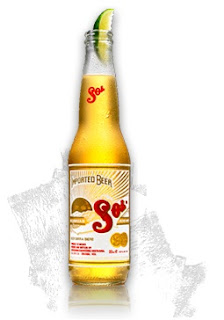 Sol
Cuauhtémoc Moctezuma Brewery
Imported Mexican Lager
IBU's: Close to ZERO
Alcohol 4.5%
Guess what? Beer snobs hate Sol. And guess what else? They will hate this review.  But, screw 'em. I don't give a shit.  I enjoy a good, dark, hoppy, complex craft beer as much as any beer snob (and maybe I kind of am a beer snob), but sometimes it's hot as Hell outside and I just want something refreshing that I can take big gulps of.  That's where Sol comes into this.
Sol, Spanish for "Sun," is an Imported Mexican Lager brewed by the Cuauhtémoc Moctezuma Brewery in Monterrey, Nuevo Leon, Mexico.  The Cuauhtémoc Moctezuma Brewery actually makes a whole host of other Mexican beers including Dos Equis, Bohemia, Tecate, and a few others.  While Dos Equis is clearly their most popular beer thanks to The Most Interesting Man in the World ads, Sol is another decent offering.
Sol is in the classic Mexican lager style.  It is 4.5% and as watery and thin as can be, yet somehow crisp and refreshing in a way only a Mexican lager can be.  It is a light yellow color, typical for the style, with little to no discernible hops.  While it certainly does not taste overly "beery," it sure is refreshing.  I definitely prefer this over the more popular Corona.  This is the kind of beer that you can have several of while having a backyard BBQ without getting filled up on beer alone.  Make sure it is extra cold, as that is how all Mexican lagers should be served.  Some people prefer to put a lime in this, and hey, that's their right.  As I've said before, I don't think any beer needs added citrus fruit, but to each their own.
This beer isn't complex, or hoppy, or even all that flavorful.  BUT, what it is, is crisp and refreshing.  Perfect for hot days outside when you don't want to sip a heavy, thicker beer.  It is good for the style and what it is meant to be, and beats the hell out of typical American macro lagers in that arena.
Drink This: if you are in need of a crisp, refreshing beer to combat hot weather and want to stay away from typical American macro trash lagers.
Don't Drink this: if you aren't outside in hot weather eating food with friends.  In most situations this beer will just not satisfy.  This isn't for beer snobs or people seeking something complex.  It is refreshing and thirst-quenching, yes, but nothing more.  I will still take it over Corona, though.
Posted by Unknown at 8/04/2011