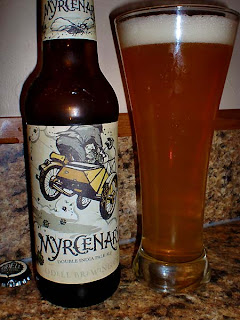 Odell Brewing Myrcenary Double IPA
Double India Pale Ale
IBU's: 70 (Reportedly)
Alcohol: 9.3%
There are a couple styles of beer that I really love, Stouts and India Pale Ales, and all the variations of these.  Odell Brewing Company out of Fort Collins, Colorado makes a couple really great IPA's.  Their Myrcenary Double IPA is part of their 4-Pack Series which includes this Double IPA, a Double Black IPA, and a Double Pilsner.
Usually I abhor sweet drinks.  Maybe that's too strong of word.  Okay, so I usually dislike sweet drinks, with only a handful of exception.  Odell's Myrcenary Double IPA is one of those exceptions... and it is truly something special.
Myrcenary pours like most IPA's, a hazy damp golden hue.  Nothing special there.  The smell and taste, though, are where it shines.  It smells like sweet oranges, citrus zest, moderate hops, and almost overwhelming floral.  You really have to smell this to understand.  It is almost a lavender or lilac-type scent, but without becoming too effeminate.  While that may sound a bit weird, it fits in so well with the sweet oranges and bite of the citrus zest.  It tastes very hoppy as is expected from a Double IPA, but it's not astringent or bitter like one would think.  It somehow remains sweet (not overly so), yet deep, lively, and dynamic.  There are clear sweet citrus notes, almost tropical fruits (guava?), and a malty backbone.  The higher ABV somehow stays hidden.  Mycenary is really, really complex and has a lot going on through the whole drinking experience.
This is probably the most dynamic and interesting IPA I've ever had.  It's not the hoppiest, strongest, or most bitter, but it has complexity and unique flavors in spades and is unlike any other IPA.  On paper the crazy floral notes and sweet orange taste don't really seem like my style of drink.  BUT, in the real-world, Odell's Myrcenary Double IPA is glorious, exceedingly delicious, and worth seeking out.
Drink This: if you enjoy a good India Pale Ale and want to try a twist on the style.
Don't Drink This: if you dislike hops.  Like any IPA, this is hoppy.  Sure, it's not nearly as bitter as some, but for the beer-drinking newbies, this will still be a bit over-the-top.