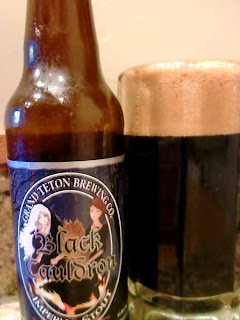 Black Cauldron
Imperial Stout
Grand Teton Brewing Co.
IBU's: 43
Alcohol: 8.0%
Grand Teton Brewing Company out of Victor, Idaho makes several delicious beers.  If you aren't familiar with Victor, Idaho, it's a small town which had a population of 840 in 2000, with there being a total of population of 1,159 for the entire Teton County in 2007.  That's Idaho for ya'.  But at least it's close to the awesome Teton Mountains.
Anyway, Grand Teton Brewing Co. makes a seasonally-released Imperial Porter called Black Cauldron.  I am reviewing last year's version which still had foil on the top of the bottle, which I've heard they discontinued this year.  I had stocked up over the winter.
Black Cauldron pours a murky, deep, black with a rich, brown head.  It is thick, creamy, and rather intimidating to light beer drinkers.  Black Cauldron smells like dark roasted malts, coffee, and milk chocolate.  I take a sip and taste roasted maltiness, cocoa, and some nuts and dry caramel in the finish.  The higher alcohol is completely hidden within the other flavors.  It is superbly delicious and thick, while still being rather drinkable.  It's flavors are balanced without being so strong that you have to sip it.  You can certainly takes glorious gulps of this stuff.  It is a solid, well-done Imperial Stout.  Way to go, Idaho!
Drink This: if you want a well-balanced, yummy Imperial Stout.
Don't Drink This: if you drink light beer.  Wait, no, you should drink this if you like light beer.  This could be your universe-expanding venture into dark beer territory.  This is solid stuff.
Posted by Unknown at 8/30/2011