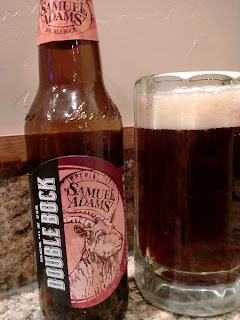 Samuel Adams Double Bock
Imperial Series
Boston Beer Co. (Sam Adams)
IBU's: 25
Alcohol: 9.5%
I have to give Samuel Adams (Boston Beer Co.) credit for creating a flavorful mainstream beer: Boston Lager.  This has been a gateway beer for many people stuck in a rut of pale, watery, flavorless mass-produced commercial American lagers.  And while Samuel Adams has become a big name in the American beer scene, they do stay true to the craft brewing scene and make a whole variety of styles ranging from the standards like Pale Ales, Witbiers, and Scotch Ales, to seasonals like Octoberfest and Winter Lager, to the more extremes like the Imperial Series and the Utopias.  There seems to be something for everyone.
In the range of Sam Adams' beers, I tend to prefer the more flavorful side of things.  Since I have yet to try a Utopia, that leaves the Imperial Series.  The Imperial Series is currently a selection of four high-proof, extra flavorful beers including an Imperial Stout, Imperial White, Double Bock, and the new Wee Heavy.
Today, we will focus on the Double Bock.  The Double Bock, or Doppelbock, is one of the Boston Beer Company's first beers, although it is making a rebirth as a higher-proof brew so that it can be part of the newer Imperial Series of beers, hence two different labels.  And thank God.  This stuff is good.
The new Double Bock pours a dark amber/mahogany hue and smells of malt, dark bread, nuts, and a bit of sweetness.  It tastes primarily of toasted malt, with some bread and molasses notes.  There are some hops in the background, but very subtle.  You can taste the higher proof alcohol, but it's welcoming as it actually seems to cut through the thick richness of the malts without being distracting.  It has a medium thickness, which is perfect for the style.  It really is quite malty and delicious, and would make a rather perfect Fall beer.  A great beer from Samuel Adams.

Drink This: if you enjoy thicker, malty yummy beers and need a beer for when the weather starts to cool.
Don't Drink This: if you are expecting something completely over-the-top, hoppy, or dark.  This is none of those things.  This is a well-balanced, flavorful Double Bock good for those who love malty deliciousness. 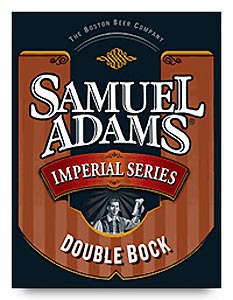