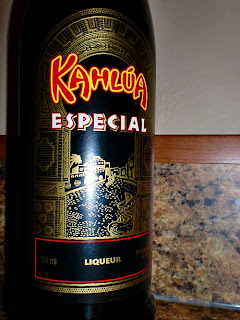 Kahlua Especial
Pernod Ricard/Allied Domecq
Coffee Liqueur
35% Alcohol (70 Proof)
with the
coffee taste being deeper, like a darker roast coffee.  I'm sure it would make a lot of great mixed drinks like a B-52 and what have you, but the White Russian is all I really ever have it in.  It's really all I want it in.  The Kahlua Especial is considerably better than standard Kahlua and makes one Hell of a White Russian.  But, that's just like my opinion, man.
Drink This: if you are watching The Big Lebowski.  Or perhaps if you just want to feel like the Dude.
Don't Drink this: if you are a Nihilist.
Posted by Unknown at 8/26/2011