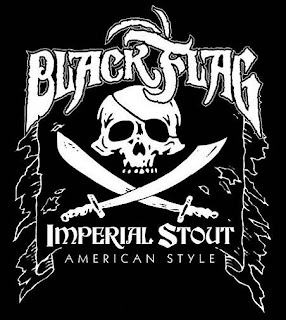 Black Flag
American Style Imperial Stout
Beer Valley Brewing Co.
IBU's: 100+
Alcohol: 11%
Black Flag, like Old Rasputin, is one bad ass beer.  Seriously, seriously bad ass.  This is the kind of drink that I almost feel bad if I'm not listening to Pantera or sailing a Viking ship while drinking it.  It's that bad ass.
Black Flag is brewed by Beer Valley Brewing Co. out of Ontario, Oregon which started production only in 2007.  This was their first production beer, although they now have several others which I now need to try.
Black Flag Imperial Stout is brewed with 8 different malts and 4 different types of hops resulting in 100+ IBU's (bitterness) and 11% alcohol.  That's pretty damn hardcore all around.  It pours as thick and black as sin, with no signs of light shining through.  It is only lightly carbonated, but will pour a good enough head if you try.  It smells like coffee, dark chocolate, dark roasted malts, and hops.  It tastes gloriously dark and deep, with notes of dark chocolate, nuts, and a great presence of hops. The 11% alcohol blends in amazingly well considering that's strong as Hell.
All in all, one of my new favorite beers.  As if you couldn't tell.
Drink This: if you want an amazingly delicious, hardcore, well-made Imperial Stout.  I imagine you can take this with you while you pillage and burn villages, whether as a Viking or a Pirate.  And yes, I'm a geek.
Don't Drink This: if you are weak.
Posted by Unknown at 8/06/2011