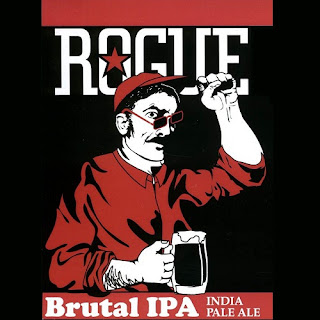 Rogue Brutal IPA
India Pale Ale
IBUs: 59
Alcohol: 5.8%
Every once in awhile, a person wants something that they can sip on while they ponder the mysteries of the universe and life, itself.  These special times require something special, something one can sip slowly over a prolonged period of time, something strong and with amazing depth.
I picked up the Rogue Brutal IPA thinking this would be such a beer since I had a couple hours to read a book and sit outside a cabin as the sun went down in Montana.  I have had many of the beers from Rogue Ales, a brewery out of Newport, Oregon, and most have been great brews.  So, I had high hopes for this beer, especially with "Brutal" on the label and the Rogue guy's glasses on crooked as if this beer just blew his mind.
It poured a cloudy medium orange color and smelled of grapefruit with a moderate amount of hops.  I took a sip expecting my tongue to be blown-up by the sheer brutality of this hoppy nectar.  But no... it wasn't.  When I think of the word "brutal," I expect something, well, brutal, like Slayer, Pantera, tanks, and cage fighting.

This beer was clearly not brutal.
It was, however, delicious and tasted mostly of grapefruit and orange peel, with background notes of honey and bread.  It was actually very well-balanced between the hops and sweetness, and really quite easy-drinking, especially for an IPA.  This beer used to be called "Brutal Bitter," and they have only recently changed the name to "Brutal IPA," perhaps with the new rise in IPA fans, I'm not sure.  For the "brutal" label to fit, it really needs to be considerably hoppier than it is and perhaps less sweet.
So, all in all, this was a delicious beer.  Was it "brutal?" No.  Was it yummy and well-balanced? Hell yes.  Apparently the "brutal" label threw me for a loop.  I was expecting something to rip my jaw off and force me to take small sips and ponder its depths.  Don't get me wrong, it is a great beer and I will probably buy it again, but it was just not what I was expecting from the deceiving label.
Posted by Unknown at 8/18/2011