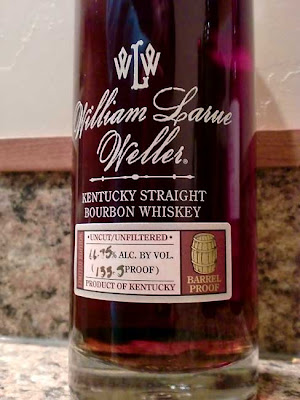 William Larue Weller Bourbon
2011 Buffalo Trace
Antique Collection
66.75% Alcohol (133.5 Proof)
If you like bourbon or whiskey at all, I recommend trying anything from Buffalo Trace's Antique Collection.  Year after year in the Fall, Buffalo Trace releases a set of five different whiskeys as part of their Antique Collection.  This includes the William Larue Weller, Sazerac Rye 18, Eagle Rare 17, Thomas H. Handy Rye, and the infamous George T. Stagg.  The Stagg is by far the most popular and for good reason, it's simply one of the best bourbons made today (I reviewed the amazing 2010 George T. Stagg here).  And while the Stagg is the clear champion of the bunch, they're all great whiskeys.
For now, I'm looking at the 2011 Release of the William Larue Weller bourbon.  It's a wheated bourbon, which as you may know, tend to be a bit smoother and mellower than unwheated bourbons (for reference, Makers Mark is a wheated bourbon).  This is essentially the amped-up version of the standard W. L. Weller Antique bourbon which is aged 7 years and bottled at 107 Proof.  And while yes, the standard is well-above average as far as bourbon goes and a truly great buy, the Antique Collection version is far superior.  The 2011 William Larue Weller is bottled at an impressive barrel-proof 66.75% Alcohol or 133.5 Proof.  It has not been watered down or filtered at all, tasting exactly how it would straight from the barrel, which I think is well, badass.
This smells of potent, sweet vanilla, light maple, and some leather.  You take a sip and get more of the sweet vanilla, lots of cinnamon, a moderate amount of oak and smokiness, and some spiciness in the finish.  Had neat, the flavor is full-on, hardcore bourbon with a moderate amount of sweetness and an alcohol kick that hits you hard in the throat.  Served with a splash of water, the smooth wheat flavors become pronounced and you would never guess you're still drinking such a high-proof bourbon.  Either way, the sweet vanilla and cinnamon are in the forefront.
Personally, I like this 2011 William Larue Weller better than the 2010 version.
Drink This: if you want a barrel-proof wheated bourbon.  Along with the George T. Stagg, this is generally one of my favorites every year from the Buffalo Trace Antique Collection.  This is smoother and mellower than the Stagg, but both are delicious.
Don't Drink This: if you're going to mix it with cola or something else.  This is too good to be served like that.  Have it neat or with a splash of water.  Plus, who the Hell mixes a $65 bourbon with cola?  Fools, that's who!  But, maybe I'm being pretentious.  I say, if you're going to mix bourbon with cola, stick with something cheap like Jim Beam.
Stay tuned for the upcoming review of the 2011 George T. Stagg...
Posted by Unknown at 10/29/2011