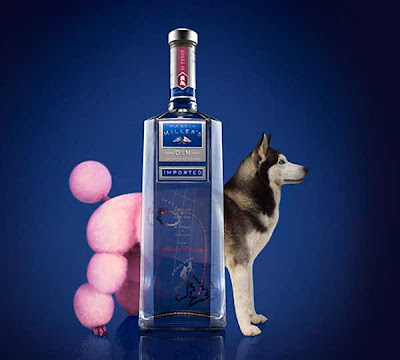 Martin Miller's Gin
Distilled in England
Blended in Iceland
40% Alcohol (80 Proof)
I don't know if many people realize how many ingredients really go into making gin.  You always hear people talking about how it has juniper in it, and yes, this is true.  BUT, there are so many other herbs and botanicals that are commonly found in gin.  For example, Martin Miller's Gin (also on Twitter) contains juniper, florentine iris, cassia bark, liquorice root, coriander, angelica, and lime peel, among other things.  That's a whole lot of flavors going into one drink!
Martin Miller's Gin is interesting in that it is distilled in England.  The raw spirit is then shipped to Iceland to be blended with spring water to bottling proof.
Martin Miller, himself, is a an English entrepreneur and admitted eccentric.  He wrote an etiquette guide called Success with the Fairer Sex, followed by jaunts in photography, concert organization, and writing Miller's Antique Price Guides.  He then ventured into real-estate and now owns several boutique hotels and an arts and science lecture venue (Miller's Academy).  He did all of this before deciding to try his hand at making a gin up to his quality standards.  Apparently, this guy just about does it all.
Martin Miller now makes two separate gins, their standard 80 Proof and a 90.4 Proof "Westbourne Strength" gin.  Both of which are similar, yet rather different gins.
Martin Miller's 80 Proof gin smells fresh and crisp, like citrus, dew, and cucumber.  You take a sip and get cool, crisp lemon, hints of juniper, ginger, some pepper, and a host of other subtleties that all blend together very well.
I tried this side-by-side with Bombay Sapphire to get a good comparison against what I consider a standard gin... and it was much, much better.  Martin Miller's Gin is more crisp, more refreshing, and more flavorful than Bombay Sapphire.  Definitely a winner.  Apparently Martin Miller's quest to make a better gin has been a success.  Wine Enthusiast Magazine gave this a 93, so my tastes must not be too far off...
Drink This: if you want a really great, refreshing gin, especially without breaking the bank ($25-35 depending on location).
Don't Drink This: if you don't like gin.  I guess that's really the only reason not to.  Martin Miller's gin is good enough to drink neat, on the rocks, in a martini, or in any sort of cocktail.  It does it all, and does it well.  Go check them out on Facebook and Twitter... then buy a bottle, or 3.  Really great stuff... 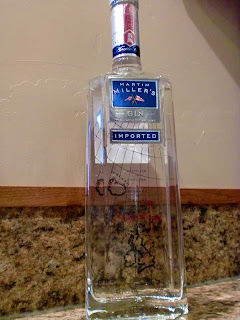