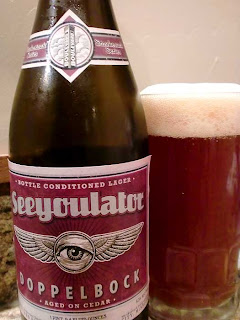 Seeyoulator Doppelbock
Cedar-Aged Double Bock
Boulevard Brewing Co.
Alcohol: 8.5%
IBU's: 35
It seems like many, if not most, aged drinks are aged in oak including bourbon, scotch, stouts, and several other beers and liquors.  This makes sense considering the inherent sweetness and maple notes that oak gives beverages, but what about other woods?  After all, people use oak, as well as many other woods for smoking meat?  Hickory, mesquite, cedar, apple, peach, pecan, etc.  So, why not beer?
Well, Boulevard Brewing Company out of Missouri makes one such beer, a cedar-aged Double Bock (Doppelbock) called Seeyoulator.  Sure, it's a silly name, but traditionally Doppelbocks had names that ended in "ator."  Don't ask me why, because, well, I don't know.  And I'm not sure that I care.  But hey, now you have a better chance of winning on Jeopardy.  You're welcome.
Seeyoulator pours a dark orange/amber color with a good, frothy head.  It smells of sweet toffee malts, raisins, with hints of wood and spice in the background.  You sip and get tastes of roasted nuts, sweet malts, cloves, wheat bread, and a strong cedar finish.  The mouthfeel is perfectly thick and creamy.
Don't get me wrong, this is a good, solid beer, but perhaps I am too accustomed to oak-aging.  The cedar notes in the finish throw me off.  The rest of the palette is just how I like beers, strong, malty and flavorful, then I start to taste wood notes, expecting an oaky sweetness, but get a bitter, odd cedar finish instead.  Oh well, it's still worthy trying, if nothing else, at least to try a cedar-aged beer.  Personally, as far as Double Bocks go (and some may find this heresy), I'd rather have Samuel Adams' Doppelbock.
Drink This: if you want to try a cedar-aged Double Bock.  It's a solid brew, the finish just confuses me.  Perhaps I just need to drink more cedar-aged beers.
Don't Drink This: if you don't like wood-aged brews.  And honestly, this isn't a good introduction to the world of wood-aged brews if you've never had one.  I say start with a standard oak-aged beer and go from there.
Posted by Unknown at 10/24/2011