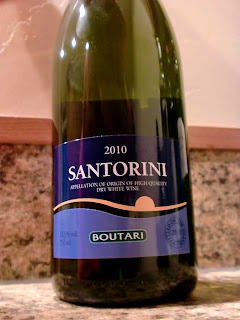 2010 Boutari
Santorini (Thira)
Origin: Greece
Alcohol: 13.5%
When most people think of wine, they don't often think of Greece.  Many other European countries, sure.  But Greece?  Not usually... well at least if you're a wine newbie.  But, this isn't to say there aren't good quality wines made in Greece.  Afterall, it's pretty close to many other famous wine making areas of the world, so why not?
One particular wine region in Greece is an island in the Aegean Sea, Santorini (also called Thira), which lies a little over 100 miles from Greece's mainland.  The area is full of volcanic aftermath, making the soil and conditions less than ideal for wine making (reportedly only 10-20% the yield of Italian and French vineyards).  This is likely a good reason why their wine production is rather limited.  Although for the wines that are produced there, they tend to share a unique flavor profile due to the special conditions.

Greece has a few of its own distinctive grape varieties including Asyrtiko, Aidani Aspro, and Athiri, among others.  Blending all three varieties makes Santorini's "Dry White Appellation," which is a protected blend.  One such blend that follows these guidelines is the 2010 vintage Boutari Santorini, from the Boutari vineyard that was founded in 1879.  If you haven't heard of Boutari, they won the International Winery of the Year for 2010 in addition to several other accolades.
The 2010 Boutari Santorini is a clear, very pale yellow.  It smells of dry lemons, grapefruit, and hints of tart apple.  On the palette it shows dry citrus, crisp melon, mineral water, and a distinct lingering earthiness that is atypical of many white wines (from the volcanic soil?).  The mouthfeel is really surprisingly creamy and heavy, almost like a Chardonnay, but with a balancing acidity.  In the world of white wines, this is rather unique in its minerally earthiness.  I've had several similar blends from other regions, but this one seemed to grow on me more.
Drink This: if you want a dry white wine that is rather unique in its flavor profile.  There is something about the mineral and earth notes that is puzzling and hard to place, yet it makes you want to keep sipping it so you can taste it again.
Don't Drink This: if you are looking for a sweet white wine.  This wine is dry, dry, dry.