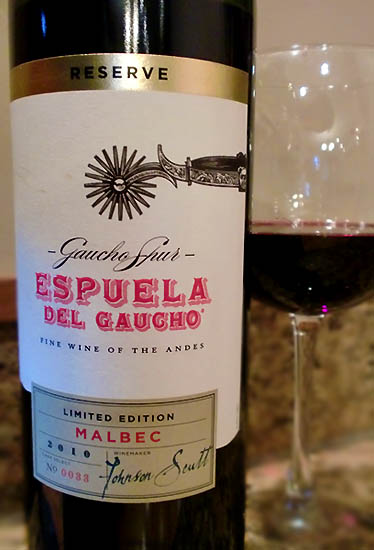 Now the term "Reserve" on a wine can mean many things, and is really only regulated in a few European countries that have strict aging protocols to apply the term.  But in general, "Reserve" wines are merely wines the winemaker thinks are of better quality, whether it's from better quality grapes, grapes from a certain plot of land (terroir), or a wine that has simply been aged longer prior to bottling.  I'm not sure which is the case with the Espueal del Gaucho Malbec Reserve, but I agree, it certainly is better than the standard bottle.

The 2010 Espuela del Gaucho Malbec Reserve pours a dark, deep plum color and much like the standard bottle, smells of black raspberries, vague spiciness, and a bit of oak.  On tasting is where it distinguishes itself from the standard bottle with dry plums, black raspberry, a distinct woodiness, nutmeg, cloves, and an earthiness that tastes a bit like cocoa powder and leather, followed by a sharper, acidic finish.  The tannins are moderate, and more present than in the standard bottle.  This wine is big, bold, earthy, dry and rustic.

Like many earthy wines, it could be quite the turnoff to some wine drinkers.  But for lovers of Malbec, this is a very good wine, verging on great...