You're probably asking why I'm reviewing Heineken when the majority of drinks I review are either new and/or random. Well, Heineken holds a special place in my heart for being both incredibly refreshing and incredibly bad at the same time.  I can never tell how it's going to hit my taste buds.  Sometimes I drink a nice, ice cold Heineken and it's perfectly thirst-quenching.  Other times I drink a Heineken and think, "What the Hell is this skunky shit?!"  Pardon my French and stuff... it's just how I feel.  When I drink a Heineken I either love it or hate it, there is no in between.  I really don't get it.  It's the only drink I've had that's like that, and believe me, I've had a lot of different drinks. 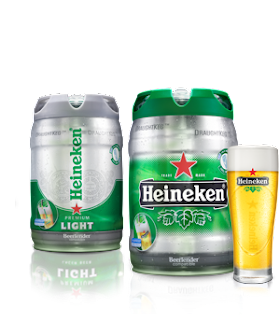 So, to describe Heineken we have the usual macro-beer suspects: it pours a clear, light straw color with an inch or so thick head that stays for a fair bit of time.  Granted, many of you probably just drink it straight from the bottle.  Fair enough, it's not like pouring Heineken into a glass is going to enhance it that much.  This isn't some fancy craft beer brewed with the resin of the single mummified hop found in Pharaoh Tittychewbacca's tomb, where the hidden flavor molecules are important... this is Heineken.  It smells like skunky, sweet malts and generic grain, like so many macro lager beers, especially those that come in green bottles (*Nerd Fact: Light changes the flavor of alcoholic beverages over time, faster in light green and clear bottles than brown).  Heineken tastes a lot how you'd expect: sweet, creamy malts, the usual pale lager airiness, and a skunky and sour bit of mild, grassy hops.

As far as macro lager beer goes, this isn't that bad.  I'd take this any day over Bud Light, Coors, or Miller.  However, it's still dreadfully boring.   But like I said earlier, sometimes it is surprisingly crisp and refreshing, other times the skunkiness is too much to handle.

Drink This: if you've never tried it.  One of the better macro beers, but still lacking compared to just about any craft beer.  But at least it comes in those little mini kegs.
Don't Drink This: if you're looking for something with depth and interesting flavor.  Go look elsewhere.  This is more of a session beer or a beer for hot weather.  Like I've said a couple times, I'm always really torn on Heineken... love it or hate it.