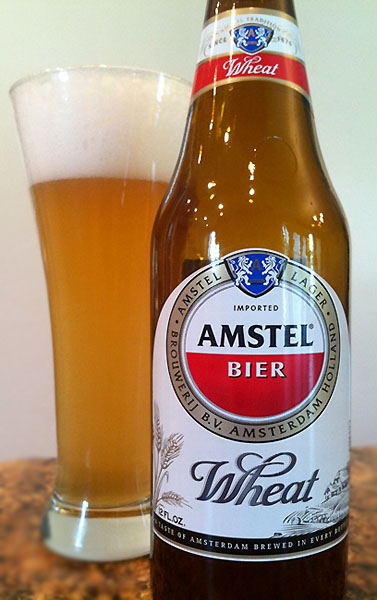 
This blog has been lacking on formal reviews of Hefeweizens, which is kind of odd now that I think about it.  I drink plenty of Hefeweizen, especially during the summer.  Well regardless, here is something brand spanking NEW...

That's right, the makers of the famous Amstel Light are releasing a new beer in America!  Okay, so they've already released it a week ago in certain parts of the U.S., but for portions of the country it's still not available.  So be on the look out!  I was fortunate enough to get a sample before it has released in my state, thank goodness!

So, for those of you who don't know, Amstel is a Dutch beer brand founded in the almighty Amsterdam, Holland in 1870.  By 1886, they were Amsterdam's largest brewer of lager.  Their famous Amstel Light was first imported to the U.S. in 1982.  So they've really not been selling their brew very long in America, at least in relation to their 140+ years of brewing.

Amstel Wheat is made in a classic Hefeweizen style using at least 50% wheat malt, barley malt, Weizen yeast, Saaz hops, and water.  No additives, no flavoring, no chemicals.  Just old fashioned, delicious beer.  Like any classic Hefeweizen, it is left unfiltered, giving it that distinct look.

Amstel Wheat pours a rather hazy, golden straw color with a thick, yet light and airy white head.  It smells predominantly of light wheat malt, a hint of apricot, and a touch of sweetness almost like a Belgian-style beer, but not as tart.  It tastes of wheat bread, light-roasted malts, a touch of lemony citrus, and more of the apricot notes that were in the aroma.  The mouthfeel is surprisingly in that it's really almost silky.  It's not watery like a domestic mass market beer, yet it's not heavy and overly bready like Hefeweizens can be.  It somehow has what I would call a perfect mouthfeel for the style. 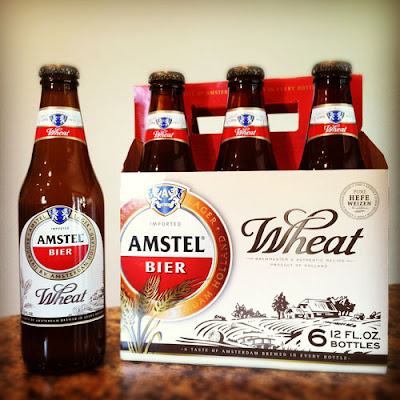 This brew strikes, for me, the perfect balance for a Hefeweizen.  Not only is it tasty, but it's exceedingly drinkable and silky smooth.  I could easily drink a couple of these in a sitting.  Unfortunately, I did not have any citrus slices (lemon, orange, etc.) to try in the beer, but I realize that's how many people prefer their Hefeweizens.  I'm willing to bet the citrus would only accentuate the apricot notes present here.

Bottom line, this is now easily in my top 5 favorite Hefeweizens of all time, perhaps even top 3.

If you can find it, try it.

Drink This: if you want an exceptionally drinkable, classic-style Wheat Beer.
Don't Drink This: if you abhor Hefeweizens, and I know some people who do.  Although... I'm willing to bet this could easily convert a few Wheat Beer haters into Amstel Wheat lovers...