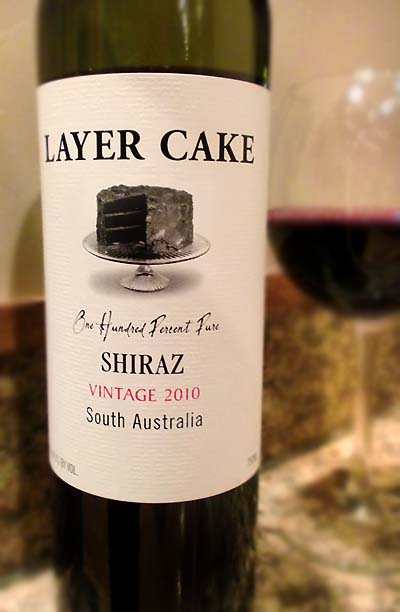 Layer Cake Shiraz
Pure Love Wines
Vintage: 2010
Origin: Southern Australia
Alcohol: 14.1%
Awhile back I reviewed the Layer Cake Malbec (yes, that's a link to the review, go check it out) and was utterly surprised with how tasty it was.
Granted, I'm a Malbec lover.
But seriously, it was good.

That was my first tasting of a Layer Cake wine and I said I would try to track down their other varietals.
Well, I did.

This is the 2010 Layer Cake Shiraz.  Go check out my other Shiraz reviews to see my write-ups about the differences between Shiraz and Syrah (*Hint, they're the same grape, but different style due to growing conditions).  Like many Shiraz wines, this is made from grapes grown in Southern Australia.  According to Layer Cake (owned by Pure Love Wines):

For our Shiraz, we pull from vineyards in McLaren Vale and the Barossa Valley; from the sandy soiled blocks on the sea coast of Gulf St. Vincent, to the Terra Rosa based, tiny-berried wind-blown rolling hills in the Barossa Zone. The microclimates give us a broad array of flavors to blend into a complex, rich, full wine.

Anyone who drinks enough wine knows that where grapes are grown does play a huge role in a wine's characteristics (this concept is called terroir).  This is likely why I have yet to try a great wine from the mountains of Idaho (Dear Idaho winemakers, send me tasting samples to prove me wrong!).  Regardless, I've had most of the Layer Cake wines now (reviews coming soon) and they consistently seem to source great grapes.

The 2010 Layer Cake Shiraz pours a deep, dark purple and has aromas of spiced plums, blackberry jam, and vanilla.  It tastes quite jammy with more of the blackberry jam, plums, black cherry, dark chocolate, and a good bit of oak and pepper.  The tannins and moderate and the finish is relatively smooth.

Like the Layer Cake Malbec, I would have liked a bit more tannins.  But as it stands, this wine is a tasty, dark fruit-forward, jammy (without being overly sweet) Shiraz.

One thing is for sure, the Layer Cake wines are not subtle nor are they lacking in flavor.  Personally, I prefer that approach over a wine that's so subtle you think it may have been watered down with, well, water.

I like this wine, but not nearly as much as the Layer Cake Malbec (which, by the way, is one of the few bottles of wine I have bought more than once this year).