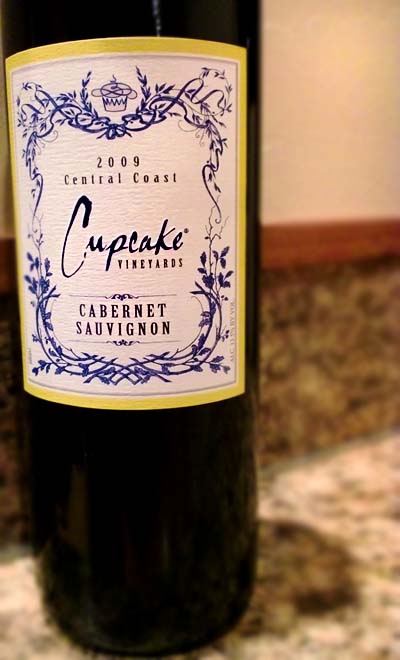 It's been awhile since I reviewed any wines from Cupcake Vineyards.  The last one was their Red Velvet wine (follow the link for the review), which I found "oddly alluring and pleasantly drinkable."  And that's no joke.  Even though it's a silly name and concept, the Red Velvet wine is a guilty pleasure of mine.
I'm man enough to admit it.

Who drinks red wine and doesn't enjoy a nice Cabernet?
That's right, no one.

The 2009 Cupcake Vineyards Cabernet Sauvignon pours a dark ruby color and has aromas of cherries and currants.  It tastes like (surprise!) juicy cherries, tart plums, and a hint of vague spice and mocha followed by a sweet, soft tannic finish.

Make no mistake, it's a decent everyday type of Cabernet.  A bit sweet, but hey, it's freaking Cupcake Vineyards.  What do you expect?!

Personally, I still prefer their Red Velvet over this.  But hey, this isn't bad either.  I look forward to tasting the 2010 vintage soon.