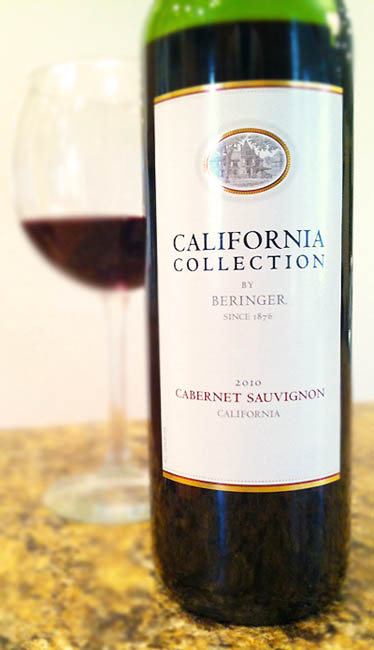 And it's not as if they only produce cheap wines either, they have plenty $50+ and even $100+ a bottle wines, but odds are you won't find those in your regular everyday grocery store.  But regardless of their wide array of wines, most people are going to be picking up their lower end bottles simply out of convenience and affordability.  Well, this is the 2010 Beringer's California Collection Cabernet Sauvignon.  This isn't their cheapest offering, it's more like one step up, but still costs under $10 a bottle.  But unlike some of their other, more expensive wines, it doesn't list exact locations in California where the grapes are from, leading me to believe it's a blend from several less prestige California growing locations.
Regardless....

The 2010 Beringer California Collection Cabernet Sauvignon pours a deep, ruby red and smells predominantly of sweet red berries, raspberries, and a bit of blackberry.  It has flavors of smooth raspberry, vanilla, and a touch of stone, followed by a sweet yet short cherry-like finish that reminds me of those cherry nib Twizzlers candies.  The tannins here are considerably weak.

This Cabernet Sauvignon is smooth, fairly sweet (not overly so), and drinkable, but unfortunately also not very interesting.  It's considerably better than many other Cabs in the sub $10 a bottle range.  For the price, it's good, not great.  I would certainly drink this on a weekday with a nice piece of red meat or Italian food, but it's not a special occasion wine.