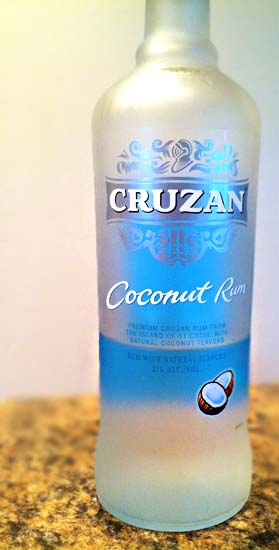 Here's another drink in a long list of things I've purchased for my wife in an attempt to find things she will drink.  Most of my attempts have been complete and utter failures.  She's picky.  Fair enough.
A few of the things that she will drink include Disaronno Amaretto and Smirnoff Whipped Cream Vodka, both in various cocktails.  Aside from that, it's really hit or miss depending on her mood.

Often I'll think I've found something she loves, only to realize a few weeks later that she only drank it only that one night and not since.

Most of my attempts are futile.  Oh well.

So, this is the Cruzan Coconut Rum.  When I got this, I was a little leery considering she found Malibu Rum to be a bit too sweet, which is pretty uncharacteristic of her.  After that, buying this was a risky gamble.  Fortunately, she enjoys a splash of this Cruzan Coconut Rum mixed with Disaronno and cola.  It's quickly become one of her favorite mixed drinks.  And Hallelujah!!!  Finally, another drink she enjoys!  She also seems to enjoy it mixed in some orange juice, making a nice tropical cocktail.  Win, win.

Anyway, so Cruzan Coconut Rum is produced in St. Croix in the US Virgin Islands.  It's a meager 42 Proof, which makes its $12 price tag not seem like such a bargain.  But considering my wife enjoys it, that's no problem.

Cruzan Coconut Rum pours crystal clear like a regular white rum.  It has aromas of rather light sweetened coconut, hints of indoor suntan lotion, and a vague tropical sweetness followed by a shadow of alcohol in the nose.  Tasting brings pretty much what the aromas suggest: a smooth, almost creamy mouthfeel with a soft sweet coconut flavor, powdered sugar flavors, and just a hint of ethanol lingering in the finish.

All in all, a little more restrained and subtle that Malibu Rum, but still plenty sweet.  The coconut flavor here is really quite tasty and almost seems more natural that Malibu Rum.  It mixes well with fruit juices and would probably make a pretty tasty addition to a pina colada.  Tasted straight, it's still bordering on cloyingly sweet, but it's definitely intended as a mixer.  PLUS, my wife enjoys it.  Works for me!