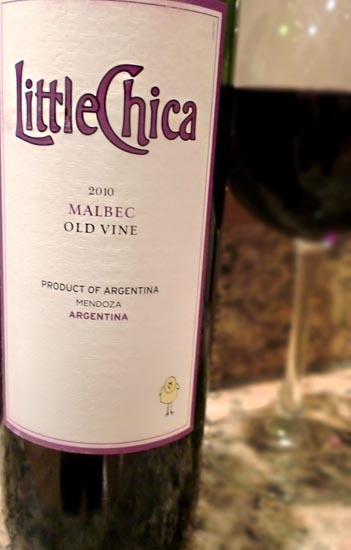 I'm still on a Malbec kick.  I don't know why.  But hey, there's worse things I could be doing.

This is my review of the 2010 Little Chica Malbec.


Like a good majority of Malbecs, it's from the Mendoza Region of Argentina.  I'm beginning to think the Mendoza Region of Argentina must be like the Napa Valley of California in that it's just flooded with wineries.  I could be wrong, but with all the Malbecs coming out of the same area, chances are good that I'm right.  And hey, I always think I'm right.  Just ask my wife.

The Little Chica Malbec is another budget wine, coming in a little under $10 a bottle.  The story behind Little Chica wines is pretty vague.  I know they also make a Tempranillo/Grenache blend, so their wines are pretty rooted in the Latin and I guess with a name like Little Chica, that makes sense.

The 2010 Little Chica Malbec pours a lovely inky dark purple.  Smelling brings a classic blackberry and cherry cocktail of aromas.  On the tongue this wine is juicy with raspberry and cherry being predominant, followed by, well, more raspberry and cherry with mild tannins and only a hint of oak.  It does seem a bit hot and the mouthfeel is certainly thinner than I was expecting, especially considering how wonderfully deep and inky this wine looks.

All in all a simple, if not boring, Malbec.  It reminds me a lot of the Lucky Duck Malbec, although I honestly feel much better buying Little Chica rather than the in-house Walmart brand of wine.

But hey, maybe that's just me.

I just wish this wine had a bit more character...